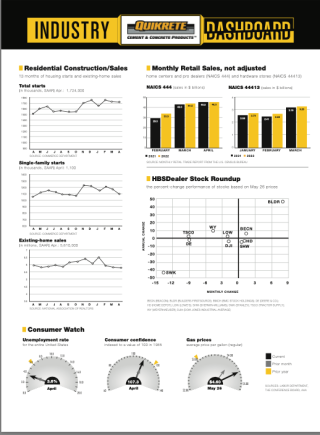 The latest version of the Quikrete Industry Dashboard, after a relatively quiet week of government data releases, shows a brighter version of the Stock Roundup than a week ago.

Wall Street finally snapped a seven-week run of losses, pushing hardware and building supply stocks toward the top right growth quadrant. Leading the field is BLDR, up more than 40 percent on the year, and one of four stocks—along with BECN, HD and SHW—to show gains compared to a month ago.

Elsewhere on the Quikrete Industry Dashboard, sales for retailers classified as building material and garden equipment and supplies dealers —NAICS 444—for the month of April reached $46.0 billion, on an unadjusted basis. That's down slightly from the same month last year.

The subset of hardware store sales (NAICS 44413) increased in March, the most recently available month of data.

Residential construction numbers are mixed. Both single-family starts and total starts in April were up for the year, but down compared to the previous month.

And existing home sales, released by the National Realtors Association, fell for the third consecutive month.

Coming next: The Conference Board will release the closely watched Consumer Confidence Index on Tuesday, May 31.