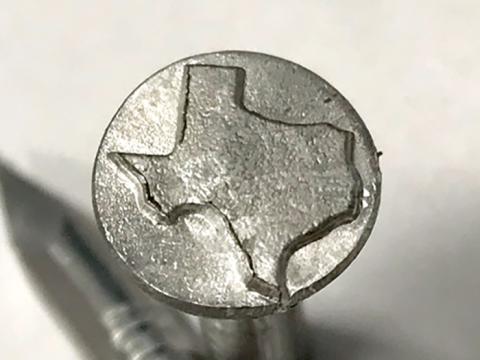 The Texas Nail is described by its creator as a novelty item. A pack of 24 one-inch nails with the state of Texas emblazoned on the head carries an MSRP of $9.99 a box.

But the product lends itself well to some serious business issues. Among them are the cost of steel, the power of price optimization, the role of international trade and the willingness of consumers to buy American.

Sold in a handful of stores in Texas, including Elliott’s Hardware’s Plano store, the Texas Nail Company is the brainchild of William Kilgore, a retired tech-industry business executive from Dallas. Armed with a design patent (pending) for nails with the shape of Texas on the head, Kilgore turned to Maze Nails of Illinois to the produce the product.

The product is also sold through the Texas Nail Company web site. After a little more than a year in business, Kilgore says business is good. Customers range from nail collectors to backyard builders all over the state. People who are proud of their Texas roots and want to include a few real Texas nails in their projects. The sweet spot for demand comes from customers in their 50s or 60s, woodworkers, and furniture makers with positive feelings about Texas.

“If you’ve ever lived in Texas, you know it’s a unique culture,” he said. “I don’t know if it’s because Texas is the only state that was actually a country before it was a state, but there is a lot of pride here. We catch a lot of grief for our pride, and that can be interpreted as positive or negative.”

“Somebody mentioned on my Facebook page that anything that you can think of that could possibly be made in the shape of Texas, it will be made and people will buy it,” he said. “I would love to be able to say: ‘it’s made in Texas,’ but that’s  not possible, at least not now,” he said. “We’re based in Texas, we package them here, but they’re made in Chicago.”

At Maze Nails Co. factory in Illinois, Kilgore says he invested in a block mold that pounds the aluminum nails with the state of Texas design into shape.  Originally, Kilgore though steel would be the better material for the Texas Nail, but aluminum has advantages. “It actually works out better,” he said. “It’s a bit shinier.” And original concerns over durability of the protruding image of the state of Texas have faded. Square hits to the head produce no distortion, he said.

Maze Nails shares a made-in-USA approach and philosophy with Kilgore. "They are outstanding partners," Kilgore said. "They've been most supportive and have a very high-quality production."

Imported nails could be cheaper to produce, but the optics of a Texas nail made in China doesn’t sit well with Kilgore, and it wouldn’t sit well with consumers, he says. “I get the sense that whether or not you buy exclusively Made-in-the-USA products, almost every U.S. citizen at least to a degree has a positive reaction to ‘made-in-the-USA,’” he said.

Kilgore also seeks to benefit from the movement among independent hardware stores to promote items that support local manufacturers and create differentiation in the store.

He describes business as “outstanding,” but not strong enough to leap into other states with California nails or New York nails, for instance. Not yet, anyway.

“And if I can get them into a few more stores, I think it would take off a bit,” he said.