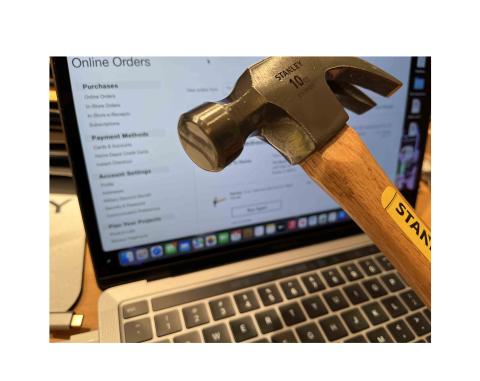 This wooden-handled claw hammer arrived first, in the conclusion of what I was calling The Great Hammer Race. Photos by Tim Burke.

At just before noon Wednesday, a FedEx driver dropped off a box on my doorstep.

The box was clearly marked as to who it came from.

My hammer had arrived.

But before I tell you who won the race, let’s review how we got here since Tuesday….

In Part one I had mentioned I wanted a hammer delivered to my home. I had wondered who would get it to me faster, Lowe’s or Home Depot.

So, I went to both retailer’s websites, and went through all the steps necessary to order online.

To recap: The orders were placed at both sites for my hammers. Later that same day I received emails from both letting me know the orders were being processed and shipped.

And so the wait began to find out who would deliver my hammer first. The race was on.

First Lowe’s sent me a message saying, “It’s on the way,” in big blue letters and a note about when the order was placed, the order number and that my payment was successfully processed.

The email also showed my order description of the claw hammer, my shipping address and the method of shipping. It read: “FDXGND.”

A little later I received an email from Home Depot with the message: “Your order has shipped,” letting me know it was on the way, along with an orange button where I could click to “View Tracking Details.”

On that page it showed the message, “Expected delivery on Wednesday.” And it also noted my address. And under “Delivery Details” it noted, “the carrier: FedEx Express.”

I went off to bed not giving it another thought.

Early the next morning, before 8 a.m., I received an email from Home Depot letting me know “my order is out for delivery.” The email included a link where I could track my delivery.

Hitting the button took me to a new page where the words, “Your order is on the road,” couldn’t have been any clearer at the top.

Several morning hours passed and then, at 20 minutes to noon, a box arrived.

And there it was: My hammer.

I brought the box inside and slit it open and I had my claw hammer. Home Depot had delivered in one day as indicated – slightly more than 24 hours after ordering online – and free of shipping charges.

There was an email a few minutes later letting me know my order was delivered. But I knew that.

On the second day, also about noon, I received an email from Lowe’s letting me know, “Your order has arrived,” and just as they indicated, it was delivered in two days.

Now I had two hammers. Two new wooden-handled claw hammers without a scuff yet!

The race was over. But I learned something extra: One day delivery or two days, you can never have enough hammers around the house and in the garage for all the home repairs we all do. 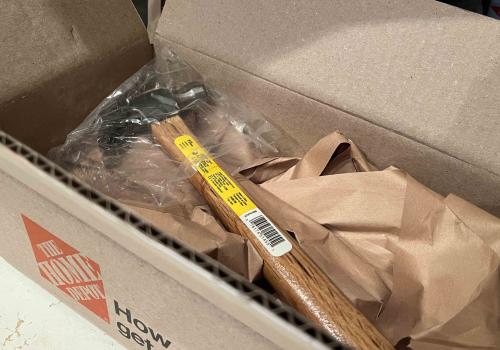 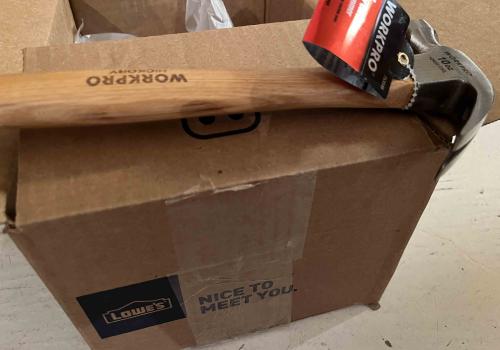