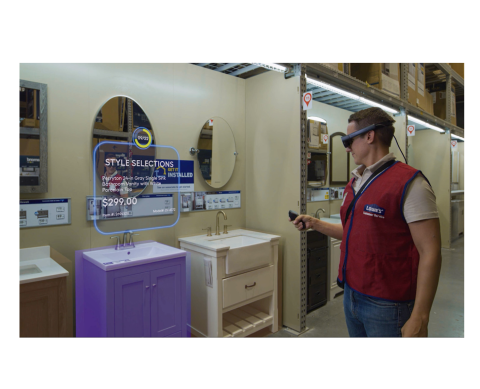 A Lowe’s store associate wears a Magic Leap 2 AR headset to see the digital twin overlaid atop the physical store as a hologram, comparing what a display should look like vs. what it actually looks like.

“Leveraging NVIDIA Omniverse Enterprise, this digital twin showcases a future in which store associates can visualize and interact with nearly all of a store’s digital data, giving them ‘superpowers’ to optimize operations and localize plans to better serve customer needs,” said the retailer.

The digital twin is a completely virtual replica of a physical home improvement store, created in NVIDIA's Omniverse environment.

A few of the areas that Lowe’s is currently exploring with its digital twin include:

AR “X-Ray Vision”: Another exploratory use case is associate “X-ray vision,” the ability to gather and view information on obscured items on hard-to-reach shelves.

AR Collaboration: With access to a Magic Leap 2 AR headset, store associates can do more than just view the digital twin – they can also update it and collaborate with centralized store planners in new ways.

The technology fuses spatial data with other Lowe’s data, the firm said, including product location and historical order information, and pulls all of these sources together into a visual package that can be accessed on a range of devices.

“Through emerging technology, we are always imagining and testing ways to improve store operations and remove friction for our customers,” said Godbole.

Also, in the coming weeks, Lowe’s said it will open up part of its virtual 3D product catalog – used to populate its digital twin – to Omniverse users, to help them create new possibilities in their applications for retail and beyond.