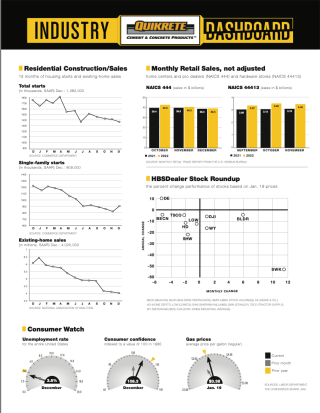 After a busy week for data updates for retail, real estate and construction — and even slightly improving mortgage rates —the latest version of the Quikrete Industry Dashboard has an overall downward flavor in its latest iteration.

On Friday morning, the National Realtors Association reported the 11th consecutive month of declines in existing home sales. The December reading stands at a seasonally adjusted annual rate of 4.02 million, down from 4.09 million in November, and down from 6.09 million in the same month last year.

Elsewhere on the Quikrete Industry Dashboard, single-family housing starts, as reported by U.S. Census Bureau and the U.S. Department of Housing and Urban Development showed a sizeable month-to-month boost in December to a SAAR of 909,000. Still, single-fam starts are down from December 2022, when they were at a pace of 1,212,000.

Meanwhile, the Stock Roundup shows a variety of negative numbers for the month and the year—in addition to some monthly gains—as Wall Street in general continues to run with the bears.

Coming next: The New York-based Conference Board will release Consumer Confidence Tuesday, Jan. 31.