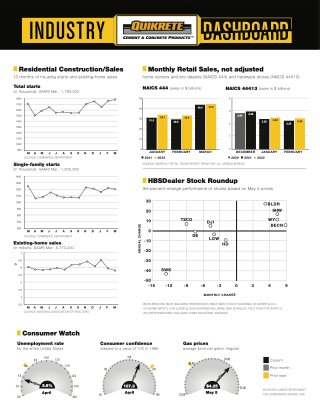 The unemployment rate of 3.6 percent was unchanged in April, according to the Employment Situation Report released Friday morning by the U.S. Bureau of Labor Statistics.

The construction sector also showed little change in the work force numbers.  However, job growth was widespread in manufacturing, leisure and hospitality, and transportation and warehousing.

Elsewhere on the Quikrete Industry Dashboard, the weekly repository of major metrics, gas prices are running high at $4.25 for a gallon of regular, according to the tally from the American Automobile Association. That’s up from $4.18 last month, and from $2.93 last year.

Up next for the Dashboard: monthly sales by NAICS 444 and 44413, housing starts and existing home sales will be released May 17, 18 and 19, respectively.