Volatility on the Stock Roundup is a major takeaway from the latest batch of metrics displayed on the Quikrete Industry Dashboard. 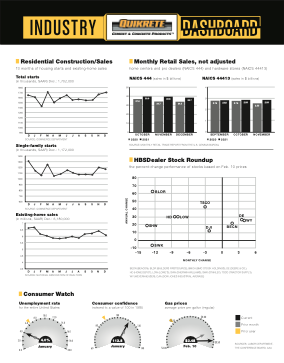 Three industry stocks remain in the top right quadrant, indicating growth for the month and the year. Those three are BECN, DE and WY. For the year, BLDR continues to lead the field, up more than 60%. BLDR is also one of seven ticker symbols that show declines for the month, ranging from -13% to -2%.

The national unemployment rate, released Feb. 4, increased slightly from 3.9% to 4.0%.  The Bureau of Labor Statistics also reported total nonfarm payroll employment increased by 467,000 in January, compared with an average monthly gain of 555,000 in 2021.

Gas prices, meanwhile, after surging 11 cents a single week on the last Dashboard, increased another 7 cents to $3.48 as of Feb. 10. That's up from $3.30 a month ago, and $2.48 a year ago, according to data from the American Automobile Association.

Next up: A three-day streak of industry metrics is on tap beginning Feb. 16, with the release of monthly sales for NAICS 444.  That will be followed by housing starts and existing home sales on Feb. 17 and 18, respectively.