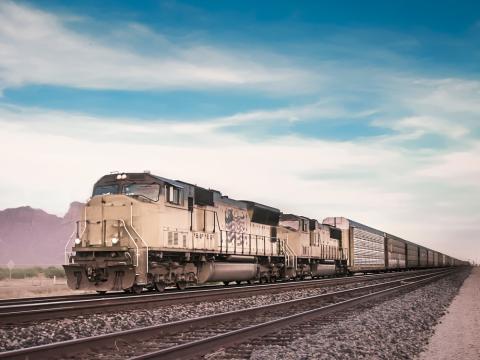 A national rail worker strike could happen as soon as Dec. 9.

The National Lumber and Building Material Dealers Association (NLBMDA) is calling on Congress to act immediately to pass a joint resolution to prevent any disruption to rail service.

Threats of a nationwide rail worker strike dramatically increased in recent days after the largest rail labor union, SMART-TD, voted to reject a tentative agreement with U.S. rail carriers, threatening a shutdown of America’s freight railroads as soon as Dec. 9.

A nationwide worker strike would cause massive disruptions to the national supply chain and cost the U.S. economy as much as $2 billion per day.

According to the NLBMDA, a contract that was negotiated in good faith by both rail unions and railroads in September must be imposed.

That agreement includes a 24% pay raise for rail workers by 2024, with annual $1,000 bonuses and no increases to health care costs. While eight labor unions voted to ratify this agreement, four unions are still holding out for more concessions from railroads on paid sick leave.

Yesterday, NLBMDA sent a letter to House and Senate leadership urging bipartisan action to prevent any disruptions to rail service. Under the Railway Labor Act of 1926, Congress has both the authority and the historical precedent to intervene in failed rail labor negotiations by either extending the ‘cooling-off period’ for unions to ratify the contract past Dec. 9, or by forcing rail workers to accept an agreement that was mediated by the Presidential Emergency Board in August.

NLBMDA also sent a letter to President Biden urging the White House to intervene and prevent a labor strike just before the nation’s busiest shopping season.

The association was specifically highlighted by the National Public Radio for pressuring the White House to act, and last night President Biden officially asked Congress to send him a joint resolution that would avert a shutdown:

“I am calling on Congress to pass legislation immediately to adopt the Tentative Agreement between railroad workers and operators – without any modifications or delay – to avert a potentially crippling national rail shutdown. Congress has the power to adopt the agreement and prevent a shutdown. It should set aside politics and partisan division and deliver for the American people. Congress should get this bill to my desk well in advance of December 9th so we can avoid disruption,” Biden said in a statement issued by the White House.

NLBMDA said that it is actively involved in robust efforts in Washington to prevent a railroad shutdown and is working with a coalition of business groups to lobby Congress and the White House to immediately intervene in the rail labor dispute.

Additionally, the NLBMDA has launchedgrassroots action campaign for members to contact House and Senate lawmakers on this critical matter. Click here to urge members of Congress to prevent a rail shutdown.