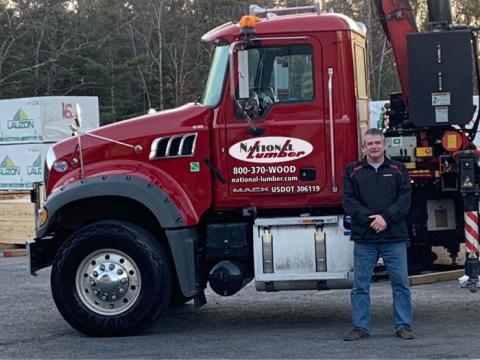 The National Lumber Family of Companies has expanded in New England with the official opening of its Kingston, Mass. lumberyard.

Overseen by Manager Scott Redfield, the latest location extends National Lumber’s delivery reach in the region’s South Shore and throughout Cape Cod. The 6-acre facility at 118 was previously occupied by Gypsum Specialists and National Lumber will continue to service drywall pros, as well as builders and contractors.

When the property in Kingston became available, National said that it was the perfect opportunity to further expand the pro dealer’s reach and services in Massachusetts. Extensive improvements were made to the buildings and grounds of the facility. This marks National Lumber's 10th lumberyard.

National noted that there is no showroom in Kingston but salespeople will provide expert advice and can special order doors, windows, millwork, cabinetry, and other products, which will come from the dealer’s additional locations with a guaranteed quick turnaround.

A grand opening celebration will be scheduled in the near future, the company said.

The National Lumber Family of Companies also includes manufacturing facilities under the name Reliable Truss and Components in New Bedford, Mass. and Branford, Conn., plus National Millwork, with a distribution facility and state-of-the-art custom millwork shop in Mansfield, Mass.

The 85-year-old family business is owned and operated by the third generation of the Kaitz family.