Lowe’s has taken another step toward reducing it carbon emissions footprint.

The deal accounts for 100 megawatts of wind energy, which is enough energy to power all 143 Lowe’s stores in Texas. According to Lowe’s, the offsetting emissions from these stores is the equivalent of planting seven million new trees in the state of Texas.

“Lowe’s is continuously working to offset our carbon footprint, and we’re proud to announce today’s commitment to renewable wind energy, a first for our company,” said Chris Cassell, Lowe’s director of corporate sustainability. “Lowe’s proudly delivers products and services that improve customers’ lives every day, and we want to apply that same level of dedication to how we lessen our impact on the planet.”

The agreement with Clearway Energy represents about 25% of the wind turbines that comprise the Mesquite wind farm development in Fisher County, Texas. Construction is slated to begin in 2019. Clearwater is a green energy provider based in Dallas.

In addition to renewable energy work, Lowe’s has made significant investments in improving energy efficiency to meet its goal of reducing energy intensity by 2020.   These investments variable fan drives installed in more than 365 stores, building management systems in nearly 200 stores, LED lighting retrofits in more than 130 stores, high-efficiency HVAC rooftop units in 100 stores. 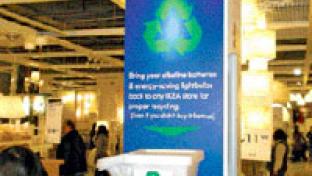 News
Green beyond the shelf