Loss prevention for dummies, and others

Loss prevention for dummies, and others

Employees and customers are becoming more adept at stealing, but hardware dealers can stem their losses by adopting a few best practices and keeping their security equipment in working order. This was the message from Joe Szvetitz, a loss prevention specialist with Risk Management Services, in his Aug.12 presentation, “Loss Prevention for Dummies,” at Orgill’s spring market in Chicago.

Szvetitz quoted statistics from a University of Florida study that pegged losses due to shrink in the hardware/LBM/garden center/home decor sector at 1.5% of sales. On average, 43% of these losses are attributed to employees.

Employee theft comes in many forms, from “sweethearting” merchandise to friends to pocketing cash. Using video images from CCTV, Szvetitz showed how the latter is often done, using methods like “shorting a deposit” and “working from an open cash drawer.”

While large retail chains routinely monitor their cashiers from remote locations, smaller operators don’t have the time to sit and watch video footage for hours on end. But hardware dealers can spot trouble early if they’re vigilant about daily cash balances for everyone who operates the register.

Szvetitz recommends a “blind balance”—making sure cashiers don’t know what their total sales should be at the end of their shift. Owners should be just as concerned about overages as shortages, Szvetitz added. If there’s too much cash in the till, “[Either] you’ve shorted a customer [or] you’ve gotten to the money before somebody else did.”

Although a daily reconciliation of cash and receipts for each cashier is standard operating procedure, Szvetitz also recommends the occasional “fake audit.” Basically, the store owner goes into the cash register and counts all the money at random times.

The most common method of stealing cash from store owners, according to Szvetitz, is fraudulent returns. It’s a major problem for retailers like The Home Depot and Lowe’s, which are frequently targeted by organized crime rings. But smaller independents are sometimes victimized by their own employees, who collect cash receipts that customers leave behind and then return merchandise through friends or family. Szvetitz had some simple tips to combat this type of theft.

“Any time there is a cash return in your business, make sure management is involved to approve it,” he said. Also, get a phone number with every cash return and then do spot checks. Call the customer to apologize about the unsatisfactory purchase—and also to confirm that the customer actually returned the item.

Every workplace needs a set of rules about who can ring up purchases for employees and their families (other than the employee) and what employees can carry out of the store at night.

But Szvetitz, a former Macy’s loss prevention officer who also holds a private investigator license, devoted part of the seminar to customer theft, which accounts for 36% of retail shrink, according to the University of Florida study. Szvetitz recommended surveillance cameras, with one “public view monitor” mounted in the store entrance.

“If you see yourself as soon as you walk into a store, it legitimizes the security of the business,” he said. “The bad guys realize you have a camera system, and it’s working.”

But far too often, Szvetitz said he finds CCTV systems that are out of order, an electronic article surveillance exit scanner that hasn’t been calibrated to detect anti-theft tags and emergency exit doors where the alarm has been silenced because no one thought to replace the battery. In addition to opening the door to more shoplifting, “it sends a bad message to your employees,” Szvetitz said.

Camera systems and electronic tracking aren’t the only preventive strategies. Using the low-tech method—an employee who greets shoppers and makes eye contact—really does work, according to Szvetitz.

“It’s a very friendly way to engage your customers,” he noted. “And those customers with ill will in their hearts will be put on the defensive. It sets the tone right away.”

Employees who steal cash from retail establishments might just be pocketing a few $20 bills when no one is looking. But some cases are much more serious, as Joe Szvetitz pointed out in his “Loss Prevention for Dummies” seminar. One of the worst-case scenarios was a hardware store in Pine Grove, Calif., which went out of business last year after a bookkeeper allegedly stole at least $106,000.

Known for its old gold mines and local wineries, Pine Grove has not escaped the economic downturn that enveloped Sacramento, Calif., Stockton, Calif., and its other big-city neighbors. The owners of Pine Grove Ace Hardware, John and Marie Wiens, blamed the recession for failing profits, and in March 2009, filed for Chapter 11 bankruptcy protection.

But as the couple began sifting through their financial records, they discovered a number of irregularities, according to investigators. Their 26-year-old bookkeeper, Ashley Alaway, had fraudulently given herself a series of raises and used business funds to pay personal bills and expenses, the owners claimed. Alaway reportedly had the passwords and the passcodes to the Intuit payroll software and the computer devoted to her bookkeeping functions.

On July 8, after a review by the Amador County District Attorney’s office, an arrest warrant was issued for Alaway. Investigators estimate that she stole at least $106,000 from Pine Grove Ace Hardware over an 18-month period.

In addition to raising her salary by 33%, Alaway issued herself regular paychecks and then arranged an additional direct deposit, thereby doubling her already inflated salary, according to the authorities. She also filtered funds from the store’s business account into various personal accounts, investigators said.

Alaway turned herself in to the Amador County jail July 14. She was released on bail and is awaiting trial on one felony count of embezzlement. Calls to her defense attorney, Robert Schell, were not returned.

In a statement provided to Home Channel News, Todd Reibe, Amador County district attorney, said: “The tragedy here is that not only did the Wiens see their dream die when their business closed due to the embezzlement, but 10 employees lost their jobs, families suffered, and the customers who frequented the business are inconvenienced by having to travel further to buy needed items.” 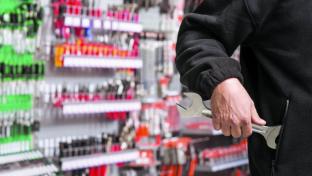 News
From the issue: Anti-theft secrets

News
Inspect what you expect