This episode of HBSDealer’s One-on-One Series is sponsored by LMC.

In a little more than 10 years, Kodiak Building Partners grew from an idea in the minds of a handful of ProBuild Holdings executives into a successful, coast-to-coast collection of LBM and construction-related brands — about 40 in all, from American Builders Supply to Zarsky Lumber.

The latest issue of HBSDealer profiles the Denver-based company. And in the interview above, CEO Steve Swinney shares thoughts on the company’s latest highlights, as well as the company's emphasis on the three ‘Ds’: Diversification, Decentralization and Due diligence.

Below is an excerpt from HBSDealer's January cover story: 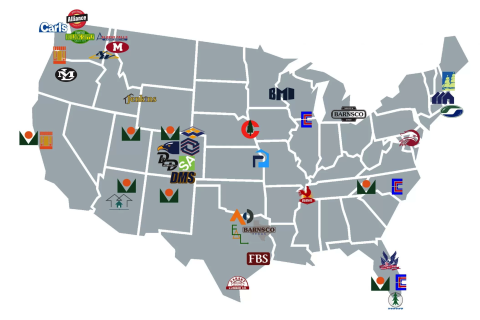 As an illustration of the extent to which Kodiak Building Partners embraces decentralization as a bedrock principal, Swinney recalled a conversation with investor partners (from Court Square Capital Partners) in 2017. The investors wanted to talk about the popular topic of synergies. They wanted to know how Kodiak promoted the idea that a company newly acquired by Kodiak will benefit by being part of the larger group.

“We said, ‘You know, we don’t really get too may synergies when we close the deal,’” Swinney recalls. “And they were like, “What?’”

The logic is simple, Swinney explained. If something works, don’t change it. After an acquisition, the decision-making remains in the hands of the local operators who know their markets better than anyone.

“We partner with great companies,” Swinney said. “Yes, of course, we do work on how to get better. But we're not going in trying to change things right away.”

In many ways, the model is quite different from the heavily-centralized, overly-staffed approach used by ProBuild Holdings, the $5 billion giant of the industry heading into the great recession. (It was later acquired by Builders FirstSource in 2015.)

Hylbert sums up Kodiak’s model this way: “The whole thesis that we had was that we wanted to go out and buy good companies and provide a platform where the people in the company could concentrate on running and growing the business,” Hylbert said. “We provide the financing and the insurance and the benefits and all that stuff. And we'd operate on a very decentralized basis from a customer and supplier standpoint. And that's exactly what was done.”

Kodiak Building Partners, like the rest of the LBM industry, is bracing for a residential construction slowdown in 2023. But there’s no panic. Just the opposite.

With a diversified portfolio that runs across lumber and building materials, construction supply, gypsum, doors/millwork and interiors, Kodiak believes it is built to withstand temporary declines in any one area. And being so built, it believes it can take a long-term view, mitigating risks and maximizing growth across the company.

Each operation has a plan for what they expect to achieve in 2023, and how they intend to maximize performance. Some companies could be down as much as 25 percent, during what is anticipated to be the first year of housing-starts declines since the formation of Kodiak 11 years ago. But others expect to continue growing.

“We’re still in a cyclical space, no matter what,” said Swinney. “But our diversification allows us to be less cyclical and to continue to make investments in the business.”

Aurora, Colo.-based Barton Supply is Kodiak’s case study in the value of its diverse-portfolio. The steel fabricator suffered through a difficult spell in 2018, “gutted” by a combination of trade-dispute steel tariffs and a sudden spike in steel prices.

“If steel were our only business, we would have had to lay off a lot of people,” Swinney said. “But we actually invested more in that business because the rest of the Kodiak world was doing really well. And we could lean into that space at a time when it was down.”

“Home building's probably going to hit a rough spot next year,” Swinney said. “But our steel businesses are doing fantastic, and they've got really strong backlogs. They're in infrastructure and more commercial and multi-family projects, which are actually doing pretty well. They’ll be among the companies that will carry the banner for us next year.”

The year 2022 was Kodiak’s busiest year of acquisitions (eight). But at Kodiak, the question is not ‘how many?’ It’s ‘how?‘ More to the point: ‘How good is the deal? and how do we create value?’ 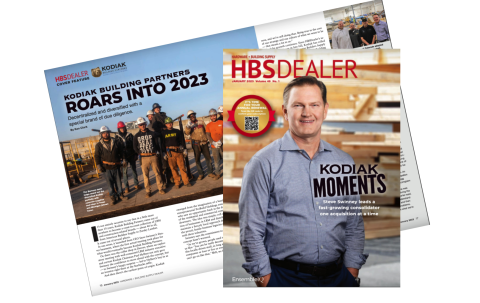 Click on the photo to read the January digital issue.

Answering those questions requires Kodiak’s brand of due diligence, described as a science and an art. “We do a lot of really rigorous analysis and consider a lot of things.” Swinney said. “Sometimes the bankers who are representing sellers say to us, ‘Why are you worried about that? No one else cares?’ Well, we do.”

Even more important than the verification of numbers on a powerpoint or spreadsheet is the effort to examine the intangible qualities of a company’s culture.

“I’m a finance guy,” said Swinney. “But diligence to me is much more about the operations and the culture than it is about the numbers.”

Mike Flood, executive VP of operations at Kodiak, will often break down field trips or meetings with potential sellers into a simple message. “He’ll either say, ‘no;’ or he’ll say, ‘they’re one of us.’ Which means, yeah, our cultures are going to click.

“Our process makes sure we align together and work well together.” Swinney continued. “To me, those are the two things that are really important and critical about the diligence process, not the number stuff.”