In simpler times, before the pandemic altered the face of retail, the Houzz & Home survey reached out to more than 87,000 U.S. homeowners.

The data shows that about 10% of respondents were likely to pursue a home office project – a figure that doesn’t take into account the work-from-home trend that swept over corporate America in March. But still, the Houzz research project, which is described as the largest survey of residential remodeling, building and decorating activity in the land, provides a valuable overview of home improvement trends.

The survey was fielded prior to the declaration of the coronavirus pandemic, between Jan. 2 and March 5, 2020. At that time, half of homeowners on Houzz reportedly planned to continue or start renovations this year (51%), at a median spend of $10,000, and one third of homeowners planned to make repairs (36%).

“Subsequent surveys have shown that over half of homeowners who were in the midst of a project at the start of the pandemic were able to continue with renovations. That said, some homeowners have opted to delay certain elective renovations due to implications related to social contact, labor and material availability and personal discretionary spending,” said Marine Sargsyan, Houzz senior economist. “Maintenance and repairs, on the other hand, are more likely to proceed, especially when the need is urgent. Deferred maintenance will accrue during this period, setting the stage for a renewed burst of activity following the pandemic.”

The full report is here.

“Following significant growth in home renovation activity over the past few years, we’re seeing the market settle somewhat in terms of scope and spend,” said Sargsyan. “That said, Baby Boomers, particularly those who have been in their homes for more than six years, are continuing to drive renovation activity and spend, bringing consistency to the market as they pursue projects that will allow them to age in place for the next decade or more.”

• Planning Takes Time
Preparing for a renovation in 2019 took homeowners longer than it did to actually renovate on average. While construction took between 2.7 and 4.5 months on average for different types of projects, the planning phase took about twice as long. Kitchens require the most lengthy planning, averaging 8.3 months, compared with master and guest bathrooms (5.4 and 4.8 months, respectively). Surprisingly, entry, foyer or mudrooms, which typically command a smaller square footage, take 6.6 months on average to plan.

• Projects Funded by Savings
Cash from savings was by far the most common form of home renovation payment (83%), even in projects with significant spend over $50,000. The next most common source of funding was credit cards (38%), which were more commonly used by those with less expensive projects, between $1,000 and $5,000.

• High-End Projects Up Among Younger Generations
Ten percent of renovating homeowners spend $80,000 or more on their home renovations. Among these projects, younger homeowners experienced a growth in expenditure, with Gen Zers up 90% and Millennials up eight% compared to the previous year, whereas Gen Xers and Baby Boomers’ high-end project spend dropped by three and a half and 11%, respectively. 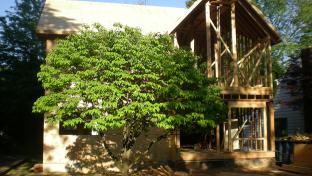 News
Survey: Millennials give renovating market a run for its money 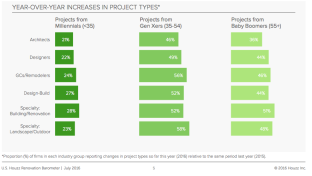 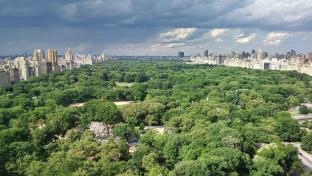 Market Insights
These ten cities are tops in renovation spend 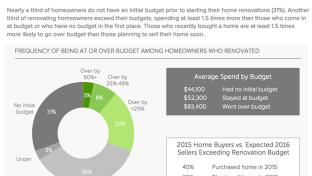