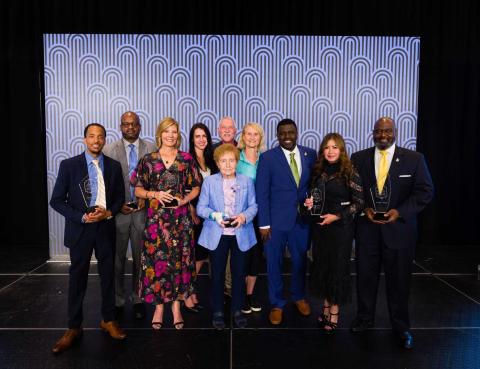 Don Wolf, Do it Best president emeritus, was posthumously inducted into the inaugural class of the Big Brothers Big Sisters of America Alumni Hall of Fame. His wife Ginny, at center, accepted the award.

Big Brothers Big Sisters of America (BBBSA), announced the first class of inductees to its inaugural Alumni Hall of Fame, honoring former Bigs and Littles that have championed the power of mentorship throughout the organization's 116-year history.

One of those honored is Don Wolf, former Big and former president of BBBSA’s national board, president emeritus of Do it Best Corp., posthumously inducted.

BBBSA said it, “recognizes these leaders whose dedication and achievements have significantly furthered its mission of inspiring young people's passions and empowering them to achieve success in life and career.”

The induction ceremony was held recently in Indianapolis, during BBBSA’s annual “Bigger Together” national conference, supported by Comcast/NBC Universal and Centene.

The inaugural members of the BBBSA Alumni Hall of Fame are, in alphabetical order, as follows:

“We are honored to celebrate these former Bigs and Littles as the first class of inductees into our Alumni Hall of Fame and recognize their personal journeys as they look back on their mentorship experiences and reflect on how it made an impact on where they are today,” said Artis Stevens, president and CEO of Big Brothers Big Sisters of America.