With heavy investment in its Paint Studio and a corresponding media blitz to promote it, wholesale sales at Ace Hardware Corp. jumped double digits in the second quarter, the co-op reported Wednesday morning.

Ace reported wholesale revenues were $1.25 billion, an increase of 14.1% as compared to the prior-year quarter. The co-op said increases were noted in virtually every department, with the paint, electrical, and lawn and garden categories showing the largest increases. The company has remodeled and re-equipped over 3,300 stores as part of the new Paint Studio initiative, which contributed meaningfully to second-quarter wholesale revenues and record retail sales in May.

Based on POS data from the 3,100 Ace retailers who transmit it to headquarters, same-store sales were positive 3.6%. For the first half of 2014, same-store-sales at these stores were up 4.2 percent.

Record revenues, which include sales of corporate-owned stores, increased 13.4% to $1.33 billion. Net income of $66.5 million increased 57.2% from last year.

“Companies our size and age do not grow double digits by accident,” said John Venhuizen, Ace president and CEO. “It’s only through a thousand points of disciplined execution from great people that results like this occur.”

“It’s a privilege to work with such a dedicated and effective team,” continued Venhuizen. “For 90 years now, we’ve taken a stand for the small, mostly family-run businesses who duke it out every day with many of the biggest, most well-funded companies on Earth. Our exceptional small business owners have once again generated record financial results by consistently delivering award-winning service to their neighbors.”

The company said its debt increased by $91.4 million compared to the second quarter of 2013, the result of factors including the addition of Valspar-branded inventories to all of its Retail Support Centers, and the acquisition of Emery-Waterhouse in the first quarter of 2014.

Investments made by the company since the second quarter of 2013 have also led to an increase in equity of $60.6 million, Ace said. 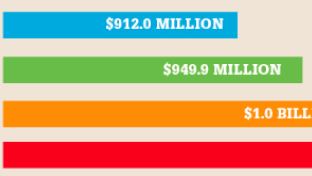 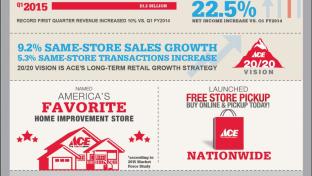