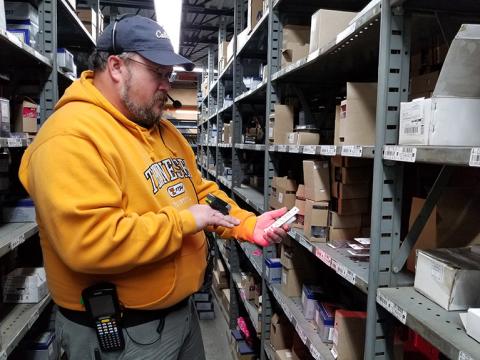 Knoxville, Tenn.-based hardware distributor House-Hasson Hardware is stepping up its automation, introducing a hands-free, pick-to-voice system in its warehouse, and a time-saving order verification system at the stores.

“Our goal is the profitability of our more than 2,000 dealers,” said Don Hasson, president of House-Hasson Hardware.  “These technological advancements make our service to them faster, enables them to better serve their customers, and reduces costs throughout our system.”

Mobile computers and headsets in House-Hasson Hardware’s corporate headquarters warehouse and upgraded electronic scanners for the company’s independent hardware store and lumberyard dealers will enable 20% faster response to dealer orders and speed dealers’ ability to get items on shelves, the company said.

Inside the company’s 450,000-square-foot warehouse, the new AccuSpeechMobile, a voice-directed locator system will sends House-Hasson “pickers” throughout the facility to collect items on customers’ orders.  The hands-free system is a big improvement over the previous method, which had employees using hand-held scanners with small screens they would read as items were scanned and included on customers’ orders.

The AccuSpeechMobile system eliminates the scanner, leaves employees’ hands free, speeds their ability to move from one warehouse location to the next, and reduces the possibility of the wrong item or quantity being placed in the order. Some 50 employees are being trained on the system, which will take about a month to have fully in place. The company's second distribution center is located in Prichard, W.Va., which is not equipped with AccuSpeechMobile, but might be in the future.

Hasson said that the previous system had boxes containing orders arriving at dealers’ stores with a list of what was in each box, an invoice, price stickers, and a chronological list of the entire order starting with box No. 1.

“Each box might have 20 to 50 items – with some dealers receiving up to 800 items per week,” Hasson said. “It required a manual check-in process by the dealer, who checked off the items in each box to confirm the correct items and quantity were received.

“With the CipherLab it doesn’t matter what box is opened first,” he added. “Dealers scan the item barcode and the CipherLab displays how many were ordered, identifies what’s received, and matches it automatically with the invoice. The CipherLab recaps the entire order and confirms for the dealer the order’s accuracy or if there is, for any reason, a discrepancy.”

He said House-Hasson’s October 2017 dealer market was the new CipherLab technology’s unveiling to owners. Cost of the improved system is $5 per month on a typical bill.

“It’s a very inexpensive way to get a great deal more efficiency,” said Steve Henry, House-Hasson executive vice president. “Then the time saved is compared to the cost, we’re confident dealers will be very pleased with this technology.”