Charity looks up to Do it Best

Charity looks up to Do it Best

More than 30 years of support and partnership has earned Do it Best Corp. the highest national honor for 2016 from Big Brothers Big Sisters of America (BBBSA).

BBBSA bestowed its annual President’s Award on Do it Best Corp. at its 2016 National Conference Awards Gala in Orlando, Fla. The award recognizes the Indiana-based home improvement co-op for its long-term partnership in promoting excellence, encouraging employee volunteerism and significant investment in furthering the organization’s mission in Northeast Indiana and around the country.

Do it Best Corp. President and CEO Dan Starr and President Emeritus Bob Taylor were on hand to receive the award from BBBSA.

“Our commitment to Big Brothers Big Sisters is enthusiastically embraced across our entire organization, so it’s an honor to receive this award on behalf of everyone at Do it Best Corp. and our many supportive vendors,” Starr said. “We are all proud of the positive impact we’ve helped make in the lives of thousands of at-risk kids around the country, and we are excited about continuing that work for years and decades to come.”

During the three decades of partnership with BBBS, Do it Best Corp. has donated more than $400,000 to the organization, with an additional $2.4 million raised through its annual vendor-support campaign.

In addition, Do it Best Corp. has contributed significant ongoing leadership support at the national and regional level. President Emeritus Don Wolf was a co-founder of Big Brothers Big Sisters of Northern Indiana, now one of the country’s largest and most active chapters, while Taylor and fellow President Emeritus Mike McClelland both served on the BBBSA national board of directors. Wolf and Taylor have also been the recipients of the BBBSA Charles G. Berwind award in 1994 and 2015, respectively.

One of the co-op’s employees received BBBSA’s highest volunteer award as well. BBBSA named Do it Best Corp.;s Laura Frederick its 2016 national Big Sister of the Year. Frederick was actually inspired to volunteer with BBBS following a special event at Do it Best Corp. several years ago and has been with her Little Sister, Emily, ever since. 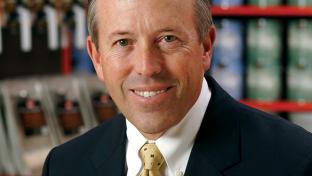 News
A big 'Don'-nation to charity