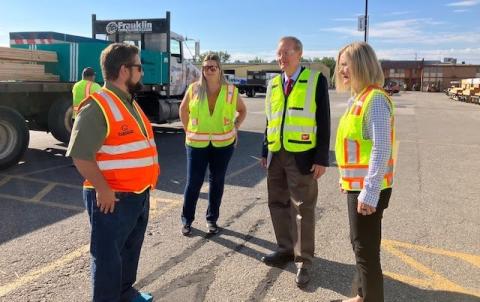 Before touring their store, lumber yard and manufacturing plants, Crapo met with company leaders to discuss tax policies that improve access to affordable housing, and the need for substantial infrastructure investments in Idaho to maintain a growing and thriving economy.

“It was great to visit Franklin Building Supply’s largest and oldest location in Boise,” said U.S. Crapo. “As an employee-owned business, Franklin Building Supply has provided quality jobs for their employees and value to their customers during their 46-year history. I will continue to support tax policies that encourage companies who do right by their employees through promotion.”

Franklin Building Supply operates 17 locations across 11 markets, including 10 in Idaho and one in Elko, Nev. 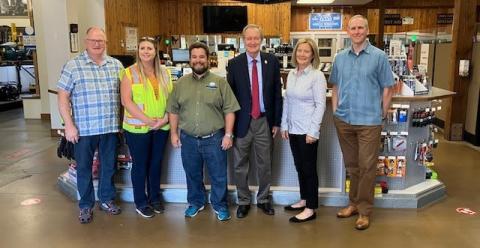 The Boise location has more than 230 employees and includes lumber and material load building and delivery services, a retail store, a cabinet manufacturer, a truck repair shop, and a truss manufacturing plant.

“On behalf of the more than 750 employee-owners of Franklin Building Supply, we appreciate Senator Crapo taking the time to come see our operation in Boise and engaging in a conversation about supporting employee-ownership through tax and other policies,” said Franklin Building Supply CEO Levi Smith. “Senator Crapo has been a consistent supporter of companies working to build retirement wealth for their employees through ESOPs (Employee-Owned Stock Plans) and we look forward to his continued advocacy.”

First elected to the House of Representatives in 1992 and then the U.S. Senate in 1998, Crapo is the top Republican on the Senate Finance Committee, which has jurisdiction over tax and trade issues, giving him enormous influence over federal tax policy and foreign trade agreements.

In addition to serving on the Senate Finance Committee, Senator Crapo is a current member and former Chairman of the Senate Committee on Banking, Housing and Urban Affairs, which has jurisdiction over efforts to promote the stability of the financial system and responsible lending to families and businesses. Senator Crapo also serves as a Chief Deputy Whip for Senate Republicans in the 117th  Congress. 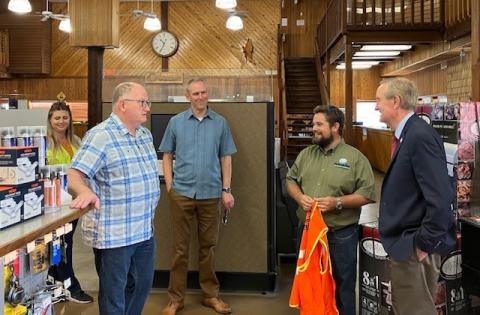 “Western Building Material Association appreciates Senator Crapo taking time from his busy schedule to visit Franklin Building Supply and learn more about our industry,” said WBMA Executive Director Casey Voorhees. “During his tenure in the Senate, he has been a leading advocate for issues impacting our membership. Thanks to Rick Lierz, Levi Smith and the entire team at FBS for hosting Senator Crapo and his staff and providing them with a local perspective on issues critical to our industry.”

As the Ranking Member of the Senate Finance Committee, NLBMDA urged Senator Crapo to prioritize the Affordable Housing Credit Improvement Act (S.1136), a bipartisan bill that strengthens the Low-Income Housing Tax Credit and would help build over 2 million additional affordable homes over the next decade while supporting the creation of nearly 3 million jobs.

This was the third summer yard tour from a U.S. Senator in recent weeks.