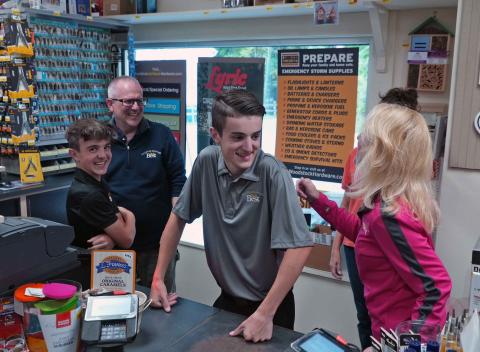 The Christofora family laughing together at the front counter of their Woodstock Hardware business.

And two sons are growing up in the family hardware business.

Vince Christofora owns Woodstock Hardware, a Do it Best dealer in Woodstock, N.Y. He and his wife Diane have operated the hardware store for 30 years. Now, their sons work the business with them.

“I think a big part of why the boys have had success in the store, is that regardless of their age we have trained and treated them as if they were regular help. Indifferent of their age,” said the owner.

Anthony, age 13, and Vincent, age 15, stay busy with schoolwork, clubs, and sports. Mainly they work Sundays. During the summer they work more.

“Thirteen and fifteen may seem young but they have been working here since they were four years old,” said Christofora.

They started dusting and fronting shelves. Then they progressed, “and learned about zero on hand and how to check quantities on hand in our Eagle point of sale system,” he said. They mastered the inventory side of things.

When they were eight and ten, the two sons were assigned departments. “One helped with the LED light bulb conversion and learned how to explain lumens to customers. The other took care of the fastener department, managed the loose inventory, found customers what they needed, and cleaned up the messes left behind,” said the owner.

When they were strong enough, said the owner, they learned how to sweep, fill and empty the mop bucket so they could mop the floor and yes, learned how to clean the toilet.

“At age 10, our younger son Anthony was assigned to the front of the store and assumed the traditional check out rolls and the older helped manage the inventory and learned how to help customers out on the floor,” said Christofora.

When the family computerized the paint department, the older son Vincent learned how to operate and maintain the computerized tint system and – with a bit of help on selecting the right product line – now mixes paint.

Meanwhile, Diane works behind the scenes and does whatever it takes for the family to be successful. “She is the glue that holds it all together,” said Christofora. “Plus, our gourmet kitchen shop is named after her – Diane’s Kitchen.”

In Diane’s Kitchen she oversees the purchasing and display of products, said the owner, and helps make the important style selections when they bring in new items. 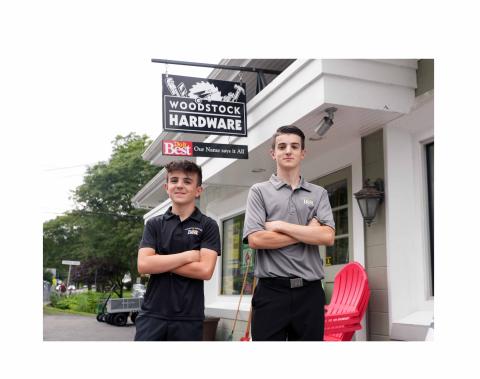 The boys, Anthony on left, and older brother Vincent, at Woodstock Hardware have grown up in the business; and show the poise and confidence to be future leaders.

When Covid hit and staffing became an issue, said the owner, he turned to his boys. “The only way we were going to be able to stay open seven days a week, on Sunday, was for them to work the day with me. And they sure stepped up.”

Anthony mastered running two point of sale stations, while his older brother Vincent exceled at running the floor and making paint. And they have been doing that every Sunday for the past two years.

The father said: “Has there been any push back by the customers about being helped by such young, apparently inexperienced, staff?”

A bit, he said, but it is usually only for a short time.

“After a customer is taken right to what they need, or their change is counted back to them ‘old school,’ they warm up to the boys quickly,” said Christofora.

So much so that if they happen to need time off on Sunday, said the owner, the customers are asking: Where are the boys?

“I do jump in to help the ‘non-believers’ but politely offer that if it was not for the boys we would not be open today and we would not be having this conversation,” said Christofora.

One thing that helps is the boys are experienced beyond their years.

The owner said his sons have sat through and participated in Do it Best’s plumbing and electrical courses and have successfully completed building projects.

“At home and as community volunteers they have been painting floors and doing exterior projects for years, as well as fixing a wide range of plumbing, electrical, and HVAC projects,” he said.

Plus, they have been going to Do it Best Markets for years, said the owner, and “they love wandering the Market floor looking for new items and placing small orders.”

Christofora said: “When it is time, we back track, and they show me what they have found and why they think it would be a good addition to the Store. The vendors treat them well and each time they usually find a few SKUs to add to the inventory.

“Are they experts? Not yet,” he said. “But they know what they know – and know enough to ask for help if they don’t.”

Sounding like a dad now, Christofora said, “since they are brothers there is an almost ‘I can top that’ flair.”

With everything being a competition, aside from Sunday, he tries to schedule them separately. So, each son works a different day of their twice-a-week Do it Best delivery.

“It is common for them to ask me which delivery was bigger each week and without an answer there is the occasional bickering of who received and stocked more merchandise,” said dad.

“One unexpected advantage of having the boys in the business is that we have a pipeline for finding those few and far between eager teenagers that want a job. So, I guess the boys also serve as staff recruiters,” he said. 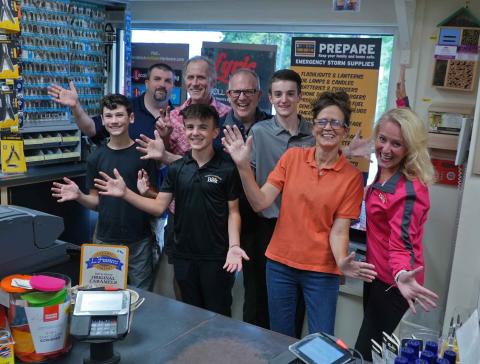 The store crew, as they are known at Woodstock Hardware, are ready to lend a hand.

Confidence runs in the family

The owner provided some advice on how to survive and thrive in a family hardware business.

“For us right now it is easy. We are still making the decisions. Our challenge is how to keep the work fun and interesting, and not have the work become punishment, so that our sons do not develop a sour taste for our family business before they are old enough to make their own decisions,” said Christofora.

They focus on two facets that are easy to forget, he said, “first, make sure the boys are compensated equally to the hired help, and if they are assuming more responsibility pay them equitably. Second, make sure we are not asking them to shoulder the failure of others just because they are family.”

As an individual, and a family, said Christofora, “we are so blessed to be together and own a business that provide products and services that customers need, and that in turn we can support our community.”

Things change quickly, he said, pointing to how products are delivered; the technology used to run their store and engage and serve their customers; and, how operators are paid for products and services.

“Ideas and technologies that have yet to be thought of could be a large part of our business in two, three, or five years,” he said. “But who better to have around but young, confident minds.”