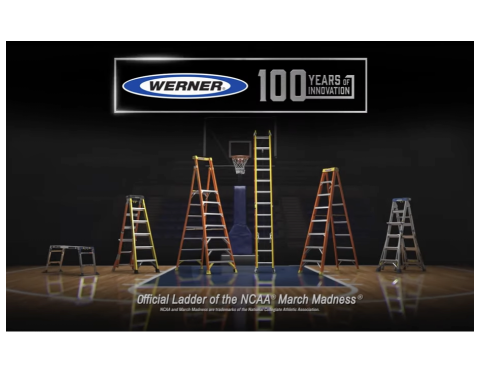 Werner, manufacturer of ladders and fall protection equipment, is partnering with the NCAA for the 14th year in a row to provide custom ladders for the net-cutting ceremonies in both the Men’s and Women’s Regional and National Championship basketball games.

“The Werner name has stood for innovation for 100 years and we are proud to carry on this legacy through long standing partnerships like the one we have with the NCAA,” said Stacy Gardella, head of global marketing technology and operations, WernerCo.

The custom Werner Podium Ladders used to cut down the nets are uniquely designed with a larger platform and higher guardrail to accommodate coaches and athletes safely and comfortably, said Werner.

“We are delighted to be a part of these winning moments and share in these experiences while keeping the players and coaches safe as they cut down the nets every year. And this year, we are pleased to offer additional opportunities for fans to be a part of the tournament experience,” said Gardella. 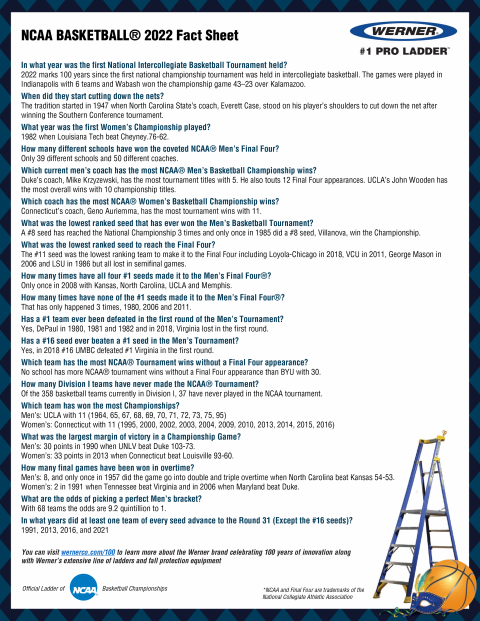 Also, the NCAA Championship Podium Ladder will be touring in New Orleans and Minneapolis during the Men’s and Women’s Final Four weekend, said the company, extending the opportunity for fans to “Step Up with Werner.”

Werner has been the title sponsor for the Naismith Awards since 2017, which is presented annually to the men’s and women’s coaches who achieve outstanding on-court success.

Last year, Stanford University’s Tara VanDerveer and Gonzaga University’s Mark Few were honored as the recipients of the 2021 Werner Ladder Naismith Women’s and Men’s College Coach of the Year Awards.

Watch “History of the Net Cutting” to see how the post-game net cutting tradition began. To learn more about the Werner Brand celebrating 100 years, visit https://www.wernerco.com/100.

Founded in 1922, and based in Itasca, Illinois, just west of Chicago, WernerCo is the official ladder of NCAA® March Madness® and a world leader in ladders offering a complete line of climbing products designed for working at heights.