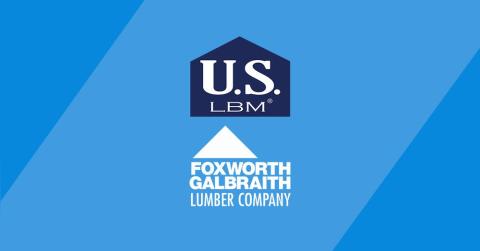 US LBM reported via Linkedin that it has completed its previously announced acquisition of Texas-based Foxworth-Galbraith Lumber Company.

In its post on the social media platform, US LBM said, “With the acquisition now complete, US LBM's footprint has grown in Texas, Arizona, Colorado and Oklahoma, and the company has expanded into New Mexico.”

The financial terms of the deal were not disclosed. US LBM operates more than 425 locations across the country.

"We are thrilled to officially welcome the Foxworth-Galbraith team to the US LBM family. US LBM and Foxworth-Galbraith are stronger together, and we are excited about our new, shared future and the opportunities that are ahead,” said US LBM President and CEO L.T. Gibson.

Based in Plano, Texas, Foxworth-Galbraith has been serving builders and homeowners since 1901. The company is a past recipient of the ProDealer of the Year Award, as is US LBM.

The acquisition was first announced by US LBM on July 8.