The U.S. economy added 1.4 million jobs in August as the unemployment rate fell by 1.8 percentage points to 8.4% compared to 10.2% in the previous month, the Bureau of Labor Statistics reported today.

Manufacturing employment rose by 29,000, with gains concentrated in the nondurable goods component (+27,000). Despite gains in recent months, employment in manufacturing is 720,000 below February's level.

Employment in wholesale trade increased by 14,000 in August, reflecting an increase of 9,000 in the nondurable goods component. Wholesale trade employment has declined by 328,000 since February.

"Total job additions from the low point during the lockdown are now over 10 million, but another 10 million jobs are needed to get us back to pre-pandemic conditions," said Lawrence Yun, chief economist of the National Association of Realtors.

Yun notes that commercial real estate is hurting, as one of the very few industries to lose jobs in the past month, with 5,500 fewer workers.

"However, the vibrant housing sector added 27,700 construction workers and trade specialists," he said.

The economist said that the path to full jobs recovery will depend upon the availability of a COVID-19 vaccine.

"Even after that, there will be some permanent shifts. Downtown offices will be less vibrant and lunch restaurants and cafes in city centers will continue to struggle," Yun said. "Yet opportunities will open up for suburban retail spaces, and for housing land development. Residential construction work will be plentiful well into 2021.”

With the revisions, employment in June and July combined was 39,000 less than previously reported.

The full August 2020 Employment Situation Report from the Bureau of Labor Statistics is available here. 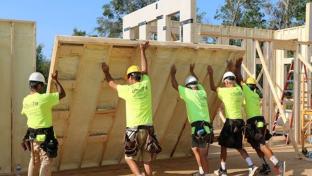 News
Jobs rise by 2.5 million in May