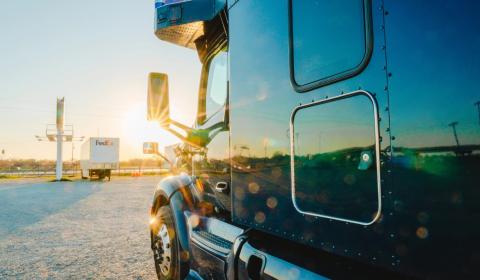 Aurora is already partnering with FedEx, among other companies, as it tests its self-driving delivery vehicles.

Frisco, Texas - How close is the nation to automated commercial vehicles transporting goods across the nation’s highways?

According to Jeremiah Kuntz, senior manager of government relations for Aurora, automated tractor trailers are already traveling down the roads of Texas, Pittsburgh, and the San Francisco Bay market.

"They are driving down a Texas highway as we speak," Kuntz told an audience of LBM executives at the  Lumbermen's Association of Texas 136th Convention & Expo, held here at the Omni Frisco Hotel.

While the technology is still being fine-tuned and includes safety CDL drivers on board the Pittsburgh-based company's trucks, Kuntz says Aurora’s vehicles should be driverless by the fourth quarter of 2023.

Aurora is currently partnering with several major companies as it tests both automated commercial vehicles and passenger cars, including FedEx, Uber, Uber Freight, and U.S. Express.

Citing figures from the Bureau of Labor Statistics, Kuntz said there is currently a shortage of about 80,000 drivers and that number could balloon to 130,000 by 2030. As a result, even if the automated truck industry sees a sizeable increase, it’s likely it will not be stealing driving jobs.

The Aurora representative, a seasoned transportation executive who served as an advisor to former Texas Gov. Rick Perry, also notes that there are numerous safety benefits including eliminating human error.

For example, Aurora’s automated vehicles travel at a speed of no more than 65 miles per hour while remaining in the right lane of highways. The vehicle’s Firstlight Lidar system also automatically monitors traffic ahead by as much as 350 feet. In fact, the mission statement of Aurora is “safely, quickly, and broadly.”

Presently, Aurora vehicles are manufactured by Paccar, Toyota, and Volvo. The software and automation are installed by Aurora but eventually, the company’s manufacturing partners will deliver the full package once the program is fine-tuned. 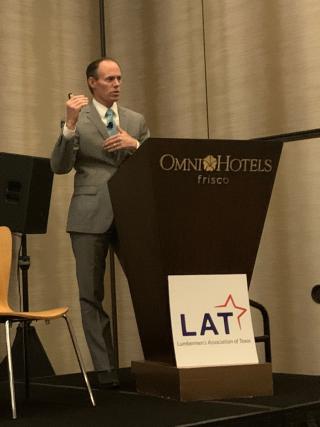 While the LBM industry has the notorious reputation of being slow when embracing new technology, most dealers in the audience appeared to like what they were seeing during the presentation.

Jim Bishop, chairman of the National Lumber and Building Material Dealers Association (NLBMDA) and owner of Vesta Lee Lumber in Bonner Springs, Kan., said the technology is unavoidable in the near future.

“There is no doubt that driver automation is coming,” Bishop told HBSDealer. “But it needs to be proven technology first.”

Robert Debs, vice president of Dallas-based Nation’s Best Holdings with more than 30 locations in 10 states, said he found the technology to be “phenomenal.”

“If it's rolled out successfully, I can see it used massively in this space and industry,” Debs said.

Megan McCoy Jones, president and CEO of San Marcos-based McCoy’s Building Supply, zeroed in on the safety aspects of the program.

“We might be a long way away from perfecting this technology but who doesn’t want safe transportation,” the McCoy’s CEO said.

And McCoy’s Building Supply is well-versed in the need for drivers given the company operates 85 stores and lumberyards, 3 distribution centers, and 2 millwork facilities in Texas, Oklahoma, and New Mexico.

“Clearly there is a driver shortage and we would not be pulling employees out of their positions,” McCoy Jones added.

A few dealers questioned what the price tag might be for an automated truck and said they imagine the price would be too high for many dealers.

In the meantime, adjustments to the final program are ongoing. In addition to having CDL drivers who act as “guardian angels” on board the automated vehicles, personnel at headquarters also continuously monitor each ride and have the ability to re-route a truck if it runs into obstacles on the highway.

Eventually, Kuntz likens a fully-operational fleet to a railroad system that remains in one lane and never breaks the speed limit. It’s also worth noting that Aurora, while still a start-up, is a publically traded company.

For now, the industry will have to wait and see the system perfected among other issues such as how insurance companies will handle policies on automated trucks. That has yet to be determined, according to Kuntz.

“It’s definitely part of the future but it’s more about a ‘what if’ concept right now,” Bishop said.