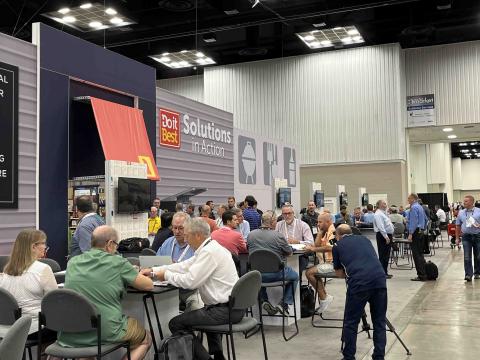 Solutions are at the forefront as store layout designers exchange ideas with member-owners at the Do it Best 2022 Fall Market.

First off, there’s what Do it Best calls a first of its kind “Solutions in Action” area. A show within the show, if you will.

“This is a new store layout,” said Cherie Jacobs, store development manager for Do it Best, speaking amidst a stream of member-owners walking around checking out the full-scale layout scene.

There’s excitement in the air. “There are five store designers outside the area seated at tables, talking to members about store layout ideas,” she said. And they are booked solid all three days of the show.

Those tables are all jammed to overflowing with owners talking to designers. It’s loud and energetic.

“Putting this new store design in front of members is key,” said Dent Johnson, VP of merchandising for Do it Best, in a slightly quieter media room upstairs from the main floor.

He said, talking one-on-one to this editor, there was “a strong appetite from members to do a new store design.”

And it’s flexible. “An owner doesn’t have to do everything at once in their redesign.” But it was important to let owners “see it, feel it and experience a physical layout.” 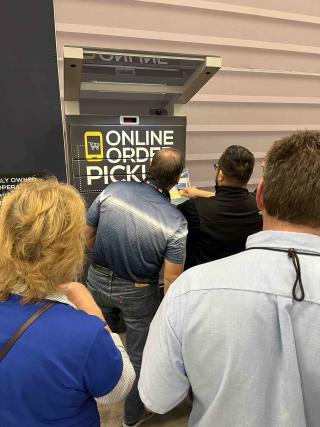 A locker demo draws many attendees who expressed interest in getting them at their stores.

Do it Best, the Fort Wayne, Indiana, based home improvement cooperative opened its show doors ­­­– and its special home center design exhibit – to a convention floor full of member-owners, back in action, back in-person, and strolling the carpeted aisles at the 2022 Fall Market.

But a new store layout wasn’t the only “reveal”.

Just outside the Solutions area was another new idea: Lockers are coming. The one on display was gaining much attention from attendees.

New online-ordering pickup/drop-off lockers are rolling out at the show, said Johnson.

The lockers are made by Sacramento, California-based Luxor Lockers and representative Camilo Asturias is standing nearby to answer any and all questions.

“There’s lots of buzz about it,” he said. “The feel from members is simply, ‘I want it’ and I’m hearing that all day long.”

The locker is galvanized steel, so it’s good for outdoors, and made in the U.S.A., he noted. It comes with a security camera mounted on top and his company is responsible for monitoring it, he added.

“When this show concludes this model goes right to the very first store in Fort Wayne for a trial.” It’s the beta test site. “After that, the next step is developing the pricing model,” said Asturias.

“We’ve had that capability on a limited basis, but now it’s available for any member-owner, as long as they have compatible POS and accurate inventory,” said Johnson.

He also announced a “white glove service team that will help a Do it Best member get POS compliant.” Think a sort of “geek squad” that will arrive at a store location and work on the technology for an owner. “That is brand new.”

Also announced by Johnson was the coming of a new Do it Best campus and a new headquarters.

This will allow the company to re-organize its spaces and departments.

“The new campus will be in Fort Wayne at the site of what once was the General Electric property,” he said. “We’ll be joined many different companies coming to the campus; we’ll make up about 30% of the campus space. The move should happen in December and it’s for our entire company.” 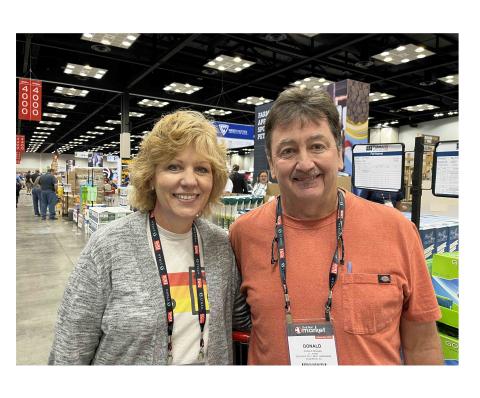 Owners Donald and Tracy Deegan looked for – and found – backyard items for their store near Madison, Wisconsin.

To Market, To Market

“We came down a day early for the training and education sessions, and now we are here shopping for outdoor product,” said Donald and Tracy Deegan, owners of Deegan’s Do it Best in Edgerton, Wisconsin.

The couple was pushing their shopping cart “full of product samples, munchies and catalogs,” in the main aisle when they paused to chat and have their photo taken.

They already purchased some outdoor items and “found discounts of up to 50%,” they said.

“We have lots of outdoor space at our store. Backyard furniture is our number one need in our market. Also, we are seeking ornamental and decorative items for outdoors too,” they said.

An attendee named Mike Thayer, with Triple A Do it Best in Canton, New York, paused to tell me how much he like his first show. “I’m here to check out everything. There are good visuals for the attendees. I’m just taking it all in.” 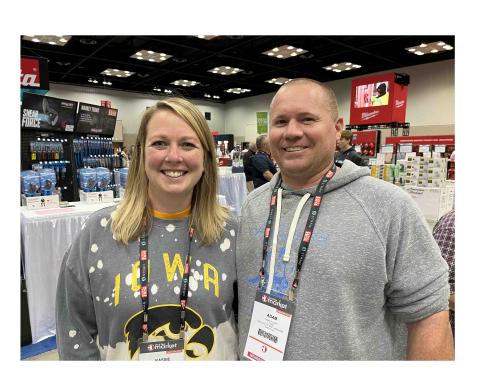 Adam and Kassie, owners from Harlan Do it Best in Iowa, came to get ideas. They also plan to wed next year.

Harlan Do it Best owners Adam Studer and Kassie Rueschenberg came from Harlan, Iowa, to find new spring items. “We are buying grills but also paint as well.” Harlan took over the business a year ago from his dad.

They have other things on their mind too, since they told this editor they are engaged and planning their wedding next year. But for now, smiling, they are here at the show taking in all the offerings.

“We enjoyed the store design area. We are getting ideas and that is what we’re after,” they said.

Getting idea at the Do it Best 2022 Fall Market is what’s happening.

Dent Johnson applied the exclamation point: “The consumer has rediscovered the value of the independent channel.”

He noted that consumers are more sophisticated. And member-owners are more adaptive today.

“We have more sophisticated operators too.”