A 2005 feature article in Home Channel News, the forerunner of HBSDealer, reported from the Do it Best Spring Market and included interviews with several children who were tagging along with their parents.

Last week, an all-points-bulletin was issued to readers who were asked to share information that could help locate the children today. The APB led to the discovery that 5-year-old Matthew Isham is now assistant manager at Brownsboro Hardware and Paint in Louisville, Ky.

Isham’s 2005 interview revealed that his favorite job in the hardware store is “Straightening up the greeting cards and helping in the wheel aisle.” (The “wheel aisle” is the term used for lawnmowers and wheelbarrows.)

Also according to the 2005 interview on the market floor, the 5-year-old Matthew Isham’s least favorite job in the hardware store is sweeping.

According to Jim Lehrer, owner of Brownsboro Hardware & Paint, Isham is now assistant manager at the Louisville store. “And he still hates sweeping,” Lehrer said.

HBSDealer approves of the participation of young children at market events and hardware industry conventions. If you or someone you know has participated in a similar event as a child (or parent of a child), send us a note with details to [email protected]. 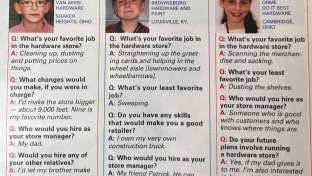 Throwback Thursday: These kids are all right

Back to the future generation at the 2005 Do it Best Spring Market.