Twice as many homeowners spent $10,000 or more on their homes than in the previous year.

And 71% of homeowners say they’ll continue to upkeep their home with the same level of investments in home improvements, even after pandemic restrictions decline.

Those are among the findings from a survey of 1,000 homeowners commissioned by the insurance company Hippo. Among the numbers:

• 12.3% of homeowners bought a new home or property within the last year.

• More than half (54%) of homeowners have made improvements to their property since the start of the pandemic.

• The backyard is the #1 spot for home improvements, followed by the kitchen, home office and home gym.

• 66% of homeowners spent more than $1,000 on home improvements and/or home repairs in the past year.

• The number of people who spent more than $10,000 on home improvements and/or home repairs doubled in the past year as compared to an average year (increased from 5% to 10%).

Here’s a breakdown of the survey’s report on hot home projects. 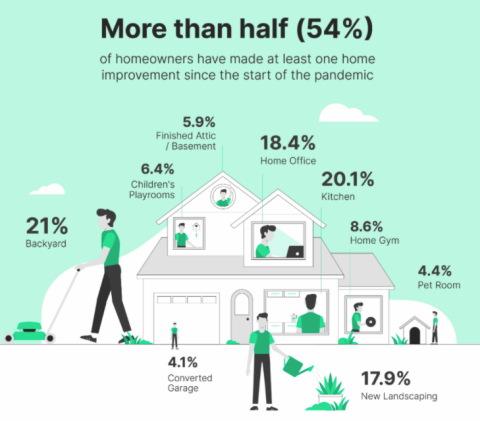 Rick McCathron, Hippo’s president, said the year of the pandemic has fundamentally changed the way homeowners take care of their homes.

"Our homes are no longer places where we spend minimal time —with our households being the primary haven where we work, socialize and rest, we’ve discovered that more people are becoming proactive in taking care of their homes," he said.

The survey found Smart Home products continue to grow in popularity. Nearly half of homeowners (44.6%), purchases smart home products in the past year.

In 2010, people owned 12.5 billion connected devices; by 2025, the number of connected devices is estimated to reach 50 billion. Increased comfort with Internet-enabled wireless devices, sleek design, and ease of use are increasing consumer adoption of smart home, the company said.