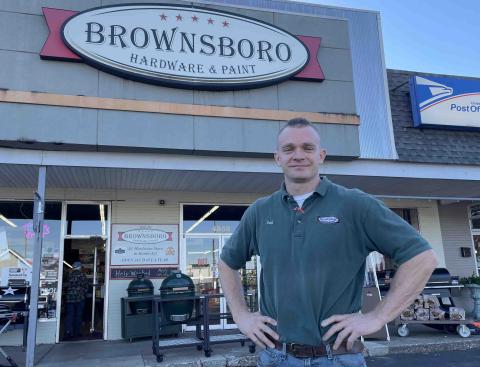 Doug Carroll stands in front of his Brownsboro Hardware store.

You’ve done it all: swept floors, dusted shelves, and worked your way up to managing the operation. Years flowed past. You learned from a great mentor.

And now, you are owner.

Do it Best member-owners Jim and Marilyn Lehrer sold the two-store Louisville, Ky.-based business to their trusted store manager recently.

Carroll, who has worked at the hardware business for two decades, shared the experiences that helped prepare him for becoming the owner.

He said watching Jim Lehrer and seeing how his success on the wholesale side of the industry helped him be successful on the retail side of it, was a key learning experience.

“Jim is very unique in how he operates,” Carroll explained. “I’ve talked with a lot of different owners in different states over the years, and nobody operates quite like he does. He’s a very ‘hands on’ kind of guy. It’s really molded me to know what to expect when running my own business.”

The new owner pointed out that having two sons of his own has reinforced the feeling that the business caters to families to help them make their homes better.

And he’s picked up on small details of importance to customers and carried them over.

“Both Jim and I give out our cell phone numbers to our customers. We both strongly believe they deserve it.” Carroll related. “It’s a little thing, but its effect is phenomenal.”

Brownsboro customers have certainly noticed the fine details in continuity, expressing their positive feelings to both the new and prior owners about the local transition.

“I have been blown away by the positive response,” Carroll said. “We’ve had hundreds of messages of congratulations on our social media and personal emails. My phone has practically melted down.”

The hardware business could easily have sold to out-of-state interests, but instead remains locally owned.

The new owner talked with people who didn’t know about the transition. “To put it gently, they were concerned. But once I told them we are staying local, and that they won’t see any difference, they were super relieved and excited.”

Carroll said his goal moving forward is to ensure customers don’t see a change. In fact, he noted, “I want them to feel even better about our local presence.”

How did it all come to be?

Dial your clock back to the year 2000. Doug Carroll explained that he was in the restaurant business before he came to Brownsboro Hardware & Paint, saying “a friend of a friend of a friend put in a good word to Jim, and when I turned in an application, next thing I know he hired me.

“It started out as a job to pay for my car and cell phone, and it just grew over time. “

As he watched the business become more successful, Carroll found himself becoming more involved in the business – and he did it without Lehrer even asking him. It continued to grow from there.

“Jim offered me a management position when I was still in college, and I originally said ‘no.’ And then I switched to, ‘I’ll think about it.’ And then, when the store was really starting to take off, I decided to give it a chance not knowing if it would be my career,” the new owner recollected.

Simply put, according to Carroll, it was a good opportunity. 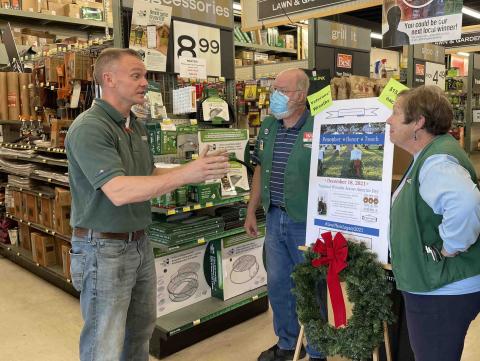 “I was comfortable with the business, and as the business continued to grow, I found myself wanting to be involved. The next thing I know it’s 20 years later and I have two kids,” he said.

“I’m happy where I am, and I love every day I come to work. Every day is different. I love being on my feet – I’m not a desk-job person – so it fits me well.”

Jim Lehrer reflected on the young man who came to work for him at the turn of the century.

“Like many young people, when Doug came in, he was a bit ‘wet behind the ears.’ But he seemed anxious and willing to learn so we hired him on.”

Lehrer remembered that when that young man got to be about 18 years old, he liked to have a lot of fun, at night, on the weekends, perhaps even during the week. (“We worked through all that," Lehrer said.)

The former owner added, “there was a time when I knew he ‘had it.’ He got into his early 20s and was hungry to learn about the industry and was hungry for knowledge, of how things work.”

The seminal moment, Lehrer pointed out, was when they added their second location in Prospect.

“He was a natural to manage that location in 2011. So that was the time he really got to cut his teeth on running a location,” said Lehrer.

His greatest asset is his work ethic, Lehrer pointed out. “He certainly puts in the hours and wants to learn and will do what it takes to take care of the customer and provide the service that we have set here.”

Lehrer was a member of the Do it Best board of directors for nine years, including two as board chair.

Maintaining that local feel in a hardware store, for your customers sake, and your team, is vital.

Owners build relationships with customers over the years, becoming longtime friends. Keeping those ties strong is a matter of continuity and trust.

Brand new owner Doug Carroll remarked that, “with all the growing chains, it’s super important. And it’s really hit home the relationships I’ve built with customers over the past 20 years.

“Many of them have taken time out of their day, since learning about the transition, just to come in and give me a hug, and give their congratulations. I’ve had some people get teary eyed. One even brought me flowers.

“It really means a lot to me and makes me happy that we were able to come to an agreement and keep this store locally owned.”

He pointed out that there are many choices nearby where people can go. But they come to his business for the personal service and the variety of hard-to-find items they have. “We hear it all the time: ‘The Big Box stores send people to us!’ That’s very gratifying.”

For decades, he noted, the hardware store has been an important part of the community, and he intends to continue that. Carroll is hoping his sons will join him at work when they’re old enough so they also can learn the importance of providing great service. 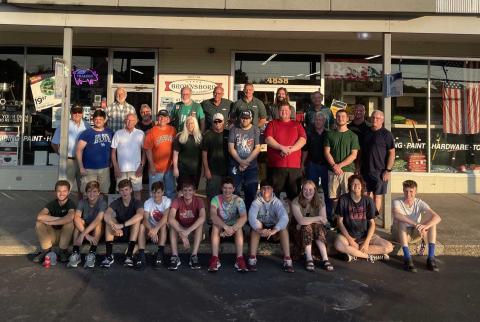 The team at Brownsboro Hardware get together for a photo. Providing great service is what they're all about.

Brownsboro team members take pride too in that local flavor being sustained.

“Our people enjoy it,” the owner said. “Being able to call people by name, ask about their families, and successfully solve their issues, is exciting.”

Carroll also thinks they’ve added to their success with the people they hire. Obviously, they want people with a passion for helping people. “But,” he related, “we hire retirees and teenagers to assist us. The retirees have a maturity that our customers enjoy, and the teenagers add a youthful element that we need.”

Furthering the theme of local continuity in younger hires, he observed “we make it a point to train them about the importance of providing great service in whatever career they choose. This helps them later in life. And we hear that from the young people who got their start here and transitioned into their own careers. This improves the whole community.”

“Our audience is very diverse. We have customers who have been with us since day one. But we also have many young people and families who come in for the first time. They come for the service,” said Carroll.

“We meet people at the front door and take them directly to the product they’re looking for,” he pointed out.

“We also sell more grills than anyone in the state. We assemble, deliver and haul off old grills, all at no additional cost. Plus, we clean and service grills,” Carroll related.

“People know they can come to us, buy a grill for the same price that the big box stores offer, and we provide all the extra service,” he added. 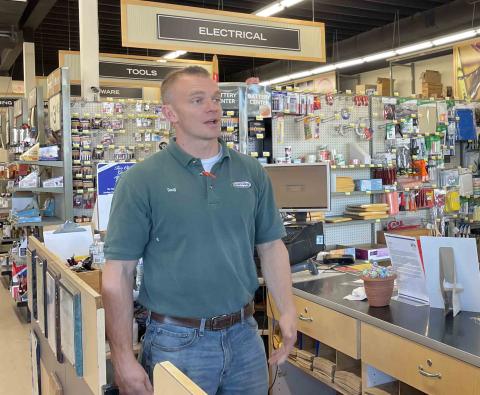 “I love every day I come to work. Every day is different,” relates the new hardware store owner.

Growing up, straightening out

Doug Carroll said: “There may be a few things I don’t want to share,” he smiled. “But there were some situations when I was kind of a wild child. Thankfully, Jim saw past that and gave me additional chances. I straightened out and the rest is history.”

The new owner took a moment to reminisce. “As a young person getting started, it blew me away when it seemed like overnight, we went from a small hardware store to this amazingly successful business. It grew phenomenally after I was here about five years.

“And it always stuck with me that as busy as it got, our employees stayed positive. Jim did a great job keeping our people informed and engaged.”

The new owner shared some tips for other hardware store owners thinking of passing the baton and looking for that same local continuity.

“In a few words: Listen. Learn. Be committed to a smooth transition. Be open with your customers about what’s happening. Communicate.”

To elaborate, Carroll added he realizes every situation is different with owners, and there is always competition with the big boxes. Many owners are struggling with this, while at the same time, many are also looking to maintain that local feel.

If you are thinking of retirement, and doing succession planning, Carroll has some advice.

“It’s going to be super important to continue that local trend and focus on finding a local buyer because not only is it better for the former owner, it’s also better for the new buyer. To know that your hardware is local and family owned, and to keep the business going the same way that got it to that point, is very important.”

You have the keys now

You’ve ascended to ownership. What can you share with readers, to help link past to present?

New owner Carroll said: “I go back to 20 years ago. Like any high school kid, you don’t always like your boss when you’re in high school, and you can’t see the big picture. And Jim is a tough guy to work for because he knows how to run a business, he’s trying to be successful.”

Now, he related, having several young people on the staff, he sees that perspective.

“I have to be a mentor and help them grow. They may not be here forever, but I want to help them prepare for their next career,” concluded Carroll. “That makes them better employees today.”