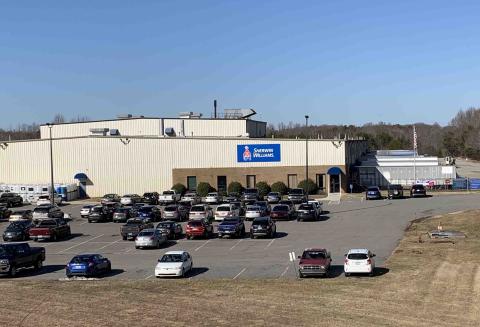 Expansion on the way for the Sherwin-Williams facility in Statesville, N.C.

Sherwin-Williams announced it signed an agreement with the state of North Carolina, Iredell County and the city of Statesville to significantly expand its architectural paint and coatings manufacturing capacity and establish a larger distribution facility in Statesville, N.C.

Sherwin-Williams said it plans to invest a minimum of $300 million in the project and add more than 180 full-time jobs at the site over the next three years, which would essentially double the existing workforce.

“Sherwin-Williams continues to invest in initiatives that support our growth for years to come. The planned expansion of our Statesville facility demonstrates a deep commitment to both our customers and the region,” said John G. Morikis, Sherwin-Williams chairman, president and CEO.

“This investment will not only allow us to meet the growing customer demand in the region, but it will also add a number of good-paying jobs to our already vibrant employee base in the community,” said Morikis.

Together, the facility upgrades will add millions of gallons of annual manufacturing capacity and sizable pallet storage capacity to support the company in meeting the increasing demand for its architectural paint and coatings products.

Construction is expected to start by the third quarter of this year, said the company, with all work slated to be completed by the end of 2024. The manufacturing facility will continue to operate for the duration of the project.