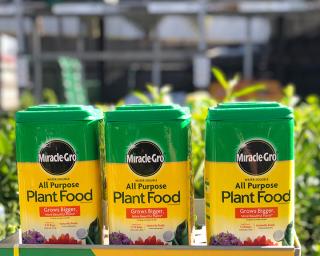 The lawn and garden products producer said sales in its Consumer Segment fell 14% to $904.5 million from sales of $1.05 billion in the previous third quarter.

For the first nine months of the fiscal year, Scott’s sales decreased 18% to $3.43 billion compared with $4.19 billion a year ago.

Looking ahead, Scotts Miracle-Gro said it expects sales for 2022 to decline 8% to 9%.

The company has also launched “Project Springboard,” which includes "a series of aggressive steps to return the business to an appropriate level of performance."

The Bottom Line: Scotts Miracle-Gro reports a net loss of $444 million as the company facedpre-tax impairment and restructuring charges of $724.2 million in the third quarter.

What the CEO said: “Behind a complicated story this quarter, we were pleased to see consumer engagement build as the weather improved and the season progressed,” said Jim Hagedorn, chairman and CEO of Scotts Miracle-Gro. “While consumer purchases are down 8 percent in units year-to-date, that performance is in line with the guidance we laid out at the beginning of the year. We are extremely encouraged that consumer purchases in May and June were at near-record levels, once again showing the resiliency of the category.”

But Hagedorn noted that shipments to retailer partners did not keep pace with consumer demand, as retailers in all channels took steps to lower their own inventory levels.

“The lower-than-expected sales in our U.S. Consumer segment, combined with continued pressure on Hawthorne sales due to oversupply issues in the cannabis industry, leave us unsatisfied with our financial results and with higher leverage than we want to maintain,” the CEO said.