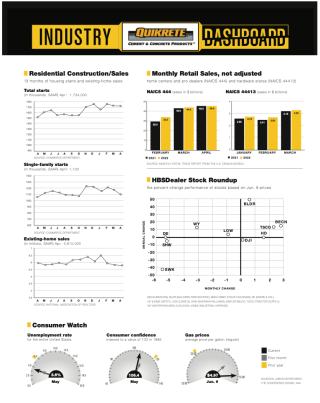 The Bureau of Labor Statistics reported the national unemployment rate for July declined to 3.5 percent, after holding steady at 3.6 percent for the previous three months.

Also on the latest version of the Quikrete Industry Dashboard: gas prices declined again, down to an average of $4.14. Last month, the average for a gallon of regular as measured by the American Automobile Association was $4.81. (A year ago, the price at the pump was $3.19.)

As nonfarm payroll employment rose by 528,000 in July, Employment in construction increased by 32,000, as specialty trade contractors added 22,000 jobs. Construction employment is 82,000 higher than in February 2020, before the start of the industry shaking pandemic.

Also noteworthy from the bureau’s release, retail trade employment increased by 22,000 in July. Since Employment in. this group is up 208,000 compared to the pre-pandemic figure.

Meanwhile on the Stock Roundup, eight of the ten ticker symbols tracked by HBSDealer are up for the month, with four up double digits.

Coming next: Residential construction data from the U.S. Census Bureau will be released Aug. 16, followed in the same week by the government report on monthly sales and the National Association of Realtors’ report on existing home sales