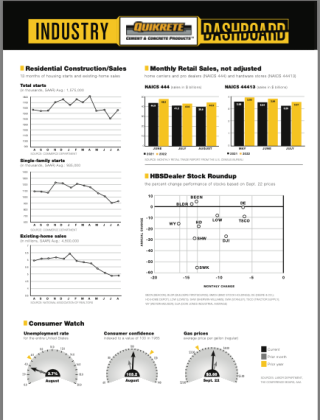 A busy of week of macroeconomic metrics was capped Friday morning by a report from the National Association of Realtors showing a slump in existing home sales.

The NAR reported that existing home sales declined for the ninth month in a row to a seasonally adjusted annual rate of 4.43 million. Sales were down 5.9 percent from September and down 28.4. percent from the same month a year ago.

“More potential homebuyers were squeezed out from qualifying for a mortgage in October as mortgage rates climbed higher,” said NAR Chief Economist Lawrence Yun. “The impact is greater in expensive areas of the country and in markets that witnessed significant home price gains in recent years.”

The NAR supplied additional color to the housing market: the median existing-home price for all housing types in October was $379,100, a gain of 6.6% from October 2021 ($355,700), as prices rose in all regions. This marks 128 consecutive months of year-over-year increases, the longest-running streak on record.

Gains were to be found, albeit inflation aided, on the monthly sales charts. NAICS 444 retailers – building material and garden equipment and supplies dealers – saw a 9.1 percent year-over-year gain.

Gas prices of $3.17 per gallon of regular, a national average as measured by the American Automobile Association, continued to hover in a middle range between last year ($3.87) and last month ($3.41).

And finally, stock prices remain as volatile as ever, with DE leading the pack.

Coming next: The Conference Board will release the closely watched Consumer Confidence Index on Nov. 29.