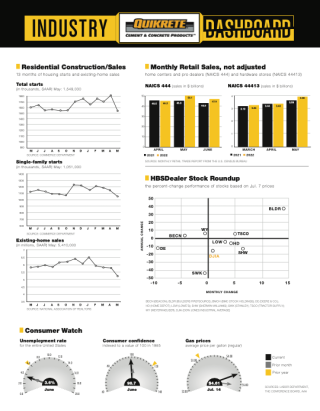 On an adjusted basis, NAICS 444 sales were down 0.9 percent from May.

The hardware store subset (NAICS 44413) showed a strong increase for the month of May, the most recent month for which data is available in this classification. May hardware store sales jumped too $3.9 billion on an unadjusted basis, well above the $3.48 billion in April, and the $3.58 billion measured in May of 2021.

The unemployment rate was 3.6 percent for the fourth month in a row, and the number of unemployed persons was essentially unchanged at 5.9 million in June, according to the Bureau of Labor Statistics,.

In the major industries of construction and retail trade, employment showed little change over the month, the bureau reported.

Elsewhere on the Dashboard, the Stock Roundup shows two ticker symbols in the upper right quadrant with gains for the month and the year: Tractor Supply and Builders FirstSource. Four companies remain up for the year, with Builders FirstSource up nearly 40 percent, despite a rough first half of the year for Wall Street.

Coming next: Housing starts for the month of June will be revealed July 19,  followed by data for existing home sales on July 20.