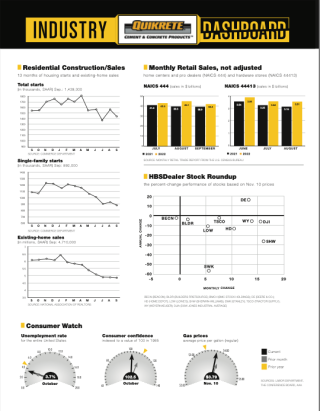 The week was loaded with election coverage and bold-faced headlines from Silicon Valley, but it was a relatively quiet week for Dashboard Data.

It’s the lull before the flurry of releases will hit Nov. 14-18, when monthly residential construction numbers and monthly sales reports will be released by government agencies. Also in the same week, Home Depot and Lowe’s will report their quarterly earnings on consecutive days.

While next week will draw the attention, there’s some interesting data from Wall Street and the American Automobile Association in this week’s Quikrete Industry Dashboard.

First, on a monthly basis, Wall Street rallied. Nine out of the ten ticker symbols tracked on the chart appear on positive territory for the month, led by SHW, WY, and DE. The last of which has the lone distinction of showing gains for both the month and the year.

Coming next: The U.S. Census Bureau will release its advanced monthly sales report on Nov. 16. Residential construction numbers are slated for Nov. 17. And existing home sales, as reported by the National Association of Realtors, will be revealed Nov. 18.