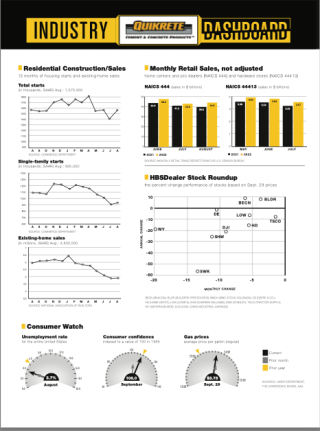 The latest version of the Quikrete Industry Dashboard reveals updated data from Wall Street and also from the researchers who give us the Consumer Confidence Index. And there’s a significant difference in the direction of the two.

The average price for a gallon of regular gas, as tracked by the American Automobile Association, is $3.78, down from the previous month, but up from $3.19 compared to one year ago.

Coming next: The Bureau of Labor Statistics will report the national unemployment rate for September on Oct. 7. It currently stands at 3.7 percent.