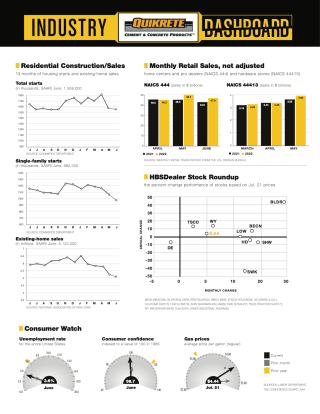 The latest Quikrete Industry Dashboard shows activity for existing home sales down for the fifth consecutive month, according to the National Association of Realtors. From an annual-rate peak of 6.49 million in January, the June figure has fallen to 5.12 million

Another streak reported by the NAR: June marked. The 124th consecutive month of year-over-year increases in the median price of a home, which stands now at $416,000

Also falling are the numbers from residential construction. Total housing starts declined from an upwardly revised May figure, while single-family starts fell below a seasonally adjusted annual rate of 1 million for the first time since June of 2020.

There was news of a positive nature as well on the updated Dashboard. Gas prices have retreated from the $5-per-gallon level (regular gas), and stand at $4.44 on average, according to the tally from the American Automobile Association. Of course, that’s still a long shot from $3.16 one year ago.

Also, in a dramatic change from nine of the 10 ticker symbols on the Stock Watch are up for the month, with BLDR up nearly 30 percent.

Coming next: The New York-based Conference Board will release the closely watched Consumer Confidence Index on July 26. In June,  the index was 98.7, after 16 consecutive months above 100.