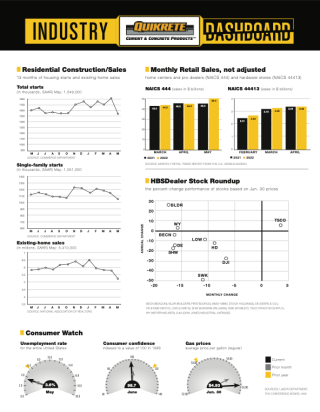 The national average for a gallon of gas remained below the $5 mark in the latest update of the Quikrete Industry Dashboard.

“Consumer confidence fell for a second consecutive month in June,” said Lynn Franco, senior director of economic indicators at The Conference Board. “While the Present Situation Index was relatively unchanged, the Expectations Index continued its recent downward trajectory—falling to its lowest point in nearly a decade. Consumers’ grimmer outlook was driven by increasing concerns about inflation, in particular rising gas and food prices. Expectations have now fallen well below a reading of 80, suggesting weaker growth in the second half of 2022 as well as growing risk of recession by yearend.”

Elsewhere on the latest edition of the Quikrete Industry Dashboard, the existing home sales chart continued its downward trend. Total existing-home sales, which include completed transactions of single-family homes, townhomes, condominiums, and co-ops, fell 3.4% from April to a seasonally adjusted annual rate of 5.41 million in May.

Next up: The Labor Department will update its nationoal unemployment rate on July 8.