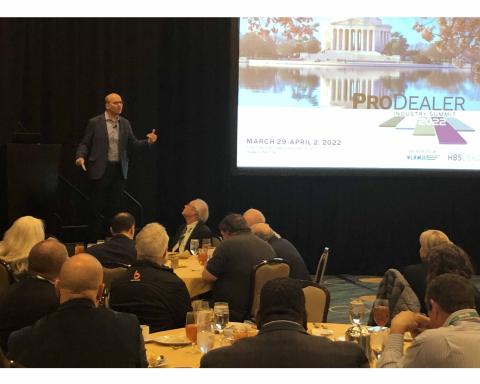 Mike Allen, of Axios, spoke to dealers in Washington, D.C.

The ProDealer Industry Summit kicked off in Washington, D.C. Wednesday with a lineup of presentations that looked inside the beltway and into the future.

First up on the agenda, in keeping with the Summit’s commitment to advance the interests of LBM dealers: a Washington Insider Breakfast raised donations for the Lumber Dealer Political Action Committee (LudPac). Mike Allen, co-founder of the media companies POLITICO and Axios served as keynote, describing to an audience of dealers and suppliers what his sources see inside the nation’s capital.

Allen suggested inflation will emerge as the number one hot campaign trail issue that Republicans will raise in the midterm elections in an effort to gain control of Congress. Not far behind is the issue of immigration.

The ProDealer Industry Summit is co-hosted by HBSDealer and the National Lumber and Building Material Dealers Association. More than 100 dealers and suppliers gathered for the event, the first time live since 2019.

A key priority for the NLBMDA is a new softwood lumber agreement. While a new deal with Canada might not be a be-all, end-all solution to supply chain issues and lumber prices, an agreement could provide potential relief to the industry.

But McKenney warned there may not be an easy road to the negotiating table with Washington politics providing obstacles.

Also on the NLBMDA's watchlist is a potential Department of Labor move that would raise the minimum salary threshold for overtime pay to make more employees eligible, regardless of their status as manager or professional.

A discussion on the evolution of the lumberyard, with healthy audience participation, featured insights from Craig Webb, president of Webb Analytics and Rob Eaton, director of Finance for Dothan, Ala.-based Townsend Building Supply.