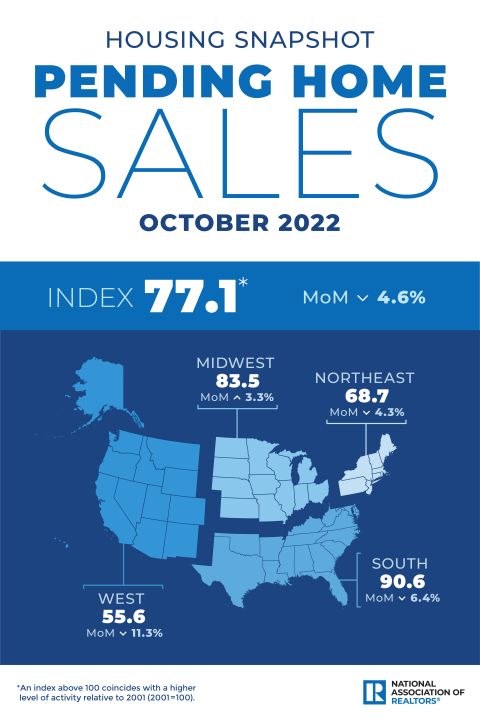 A snapshot of the PHSI for October 2022 from the National Association of Realtors.

Pending home sales declined for the fifth consecutive month in October, the National Association of Realtors (NAR) reported this morning.

The Pending Home Sales Index (PHSI), a forward-looking indicator of home sales based on contract signings, fell 4.6% to 77.1 in October.

Year-over-year, pending transactions plunged by 37%. An index of 100 is equal to the level of contract activity in 2001.

“October was a difficult month for home buyers as they faced 20-year-high mortgage rates,” said NAR Chief Economist Lawrence Yun. “The West region, in particular, suffered from the combination of high interest rates and expensive home prices. Only the Midwest squeaked out a gain.”

An index of 100 is equal to the average level of contract activity during 2001, which was the first year to be examined. By coincidence, the volume of existing-home sales in 2001 fell within the range of 5.0 to 5.5 million, which is considered normal for the current U.S. population.

Pending contracts are good early indicators of upcoming sales closings but the amount of time between pending contracts and completed sales is not identical for all home sales, the NAR noted.

“The upcoming months should see a return of buyers, as mortgage rates appear to have already peaked and have been coming down since mid-November,” Yun said.

Earlier this month, the NAR reported that existing-home sales faded for the ninth month in October to a row to a seasonally adjusted annual rate of 4.43 million. Sales fell 5.9% from September and 28.4% from one year ago.

The median existing-home sales price rose to $379,100 in October, an increase of 6.6% from the previous year.

The NAR also reported that existing single-family home sales declined to a seasonally adjusted annual rate of 3.95 million in October, down 6.4% from 4.22 million in September and 28.2% from one year ago.