ROME, N.Y. — It used to be said that the logistics division of a typical retail business would get little attention from customers and corner-office executives – until something went wrong.

Those days are over. The global pandemic has elevated the hardware and lumber industry supply chain from a behind-the-scenes service to a front-and-center, mission-critical, 24-7, top priority. Case in point: a recent HBSDealer survey asked readers to describe their company’s biggest challenge in the spring of 2021. Supply chain (and the related issue of pricing) generated a whopping 80% of the votes.

Against this background, Memphis, Tenn.-based Orgill is flexing its distribution muscle with the opening of a new distribution center in Rome, N.Y., the company’s eighth. The new facility is remarkable both for the state-of-the-art features culled from Orgill’s book of best practices and industry innovations, and the accelerated timeline used to build it from scratch.

The D.C. is built to reduce "miles and footsteps."

When the pandemic hit, Orgill pushed ahead its opening date for the Rome facility by a full year – shooting for the summer of 2021, instead of the original target of summer of 2022. Rome will deliver 17% additional square footage, and even more capacity.

(Meanwhile, Orgill is nurturing plans for a distribution-center expansion in the Western U.S. More on that story is expected soon.)

The driving factor behind it all, said Orgill President and CEO Boyden Moore, is “growth.”

“Our business grew a lot last year and has grown even more in the first quarter... up over 30%,” he told HBSDealer in an interview inside the Rome facility “We've got a lot of opportunities to continue to grow with customers reaching out to us, but we're committed to getting our service level right first for the customers that we already serve.”

Last year, Moore explained the challenges of Orgill involved not only increased demand from Orgill’s core customers, but from customers who turned to Orgill from competing distributors whose supply chains also came under pressure. (Orgill serves over a thousand Ace, True Value, and Do it Best customers as a secondary supplier.)

"We've got a lot of opportunities to continue to grow."
Boyden Moore , President and CEO, Orgill

Growth is a tradition at Orgill, founded in 1847. The company grew to sales of $1 billion in 2006. In took 10 more years to hit the $2 billion mark. And in 2020, Orgill crossed the $3 billion milestone. That kind of hockey-stick growth doesn’t happen in the distribution industry without intense focus on the art and science of moving products from points A to B with military-like precision and efficiency. A late-spring tour of the upstate New York facility as it was preparing to bring its considerable powers online revealed a number of synergies, strategies and tactics that represented the best ideas in distribution, and some of the best practices from existing DCs.

Mark Scanlon, VP of Northeast distribution for Orgill, describes the Rome distribution center as  a “team effort.” Not only to get the facility up and running, but to keep it humming. “The phrase you’ll hear us use again and again is ‘miles and footsteps,’” he told HBSDealer. “The idea is to minimize the miles logged bringing product to customers, and the footsteps made by associates here in the building.”

For every redundant mile eliminated and unnecessary footstep avoided – whether that’s footsteps to turn off the lights or shovel the walkway -- the distributor increases its efficiency and saves dollars.

A short list of innovative features in Rome would include:

• Snow management. Beneath the sidewalk is a heating system to prevent ice and snow build up during the brutal upstate New York winters. The roof of the facility is also winterproofed – built to withstand at least 8 feet of snow accumulation.

• Long-range barcode scanners. These futuristic lasers shoot a widening laser circle toward barcodes, allowing the DC employee easy access to products on high shelves without climbing a ladder, or without stepping off a forklift.

• Reverse osmosis water purification station. This area of the facility helps maintain the long life of the battery-powered fleet of forklifts of all varieties. The purified water helps extend the life of the hard-working batteries.

• VNA system: VNA is Orgill terminology for a space-saving section of the DC with “very narrow aisles” that measure 77 inches in width. That’s just wide enough to allow specialized forklifts to slide through by connecting to a sensor embedded in the concrete floor.

• Communication enhancements. Even before one enters the massive working warehouse, the front office areas are equipped with integrated flat-screen televisions in the various rooms and work areas, allowing managers to easily share information across the network.

There is no shortage of statistics to describe the Rome facility: 68 dock doors, 24 receiving doors, a 778,000 sq. ft. footprint. But those numbers can only tell part of the story of how Orgill is making use of the space. If one measure the area of the three-level re-pack module, the usable space expands to well over a million sq. ft.

With the addition of Rome, the company operates a system of eight DCs – as far west as Post Falls, Idaho, and as far south as Tifton, Ga. The launch of the Rome, D.C., will bring several benefits to Orgill nation, Moore said. Obviously, it will facilitate deliveries in the fast-growing Northeastern United States. It will also relieve pressure on Orgill’s Inwood, W.Va. distribution center, which was bearing the brunt of the pandemic-induced demand from the region. Moore says benefits will also trickle down to the Midwest and South areas through various changes in routing plans.

And those benefits are coming with a sense of urgency.

It hasn’t been an easy environment for operating as a retailer, Moore said. And the same goes for building a distribution center, a task burdened by its own unique supply challenges, such as a shortage of racking or trucks.

“Despite all of the similar supply chain problems that we've been dealing with as a supplier, these guys here in Rome have kept this project absolutely on track on an accelerated timeline,” Moore said. “And that’s been amazing.” 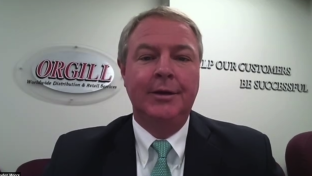 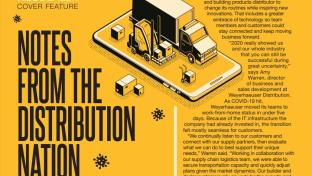 Notes from the Distribution Nation

Overcoming the challenges of a pandemic, distributors deliver with perseverance and flexibility.