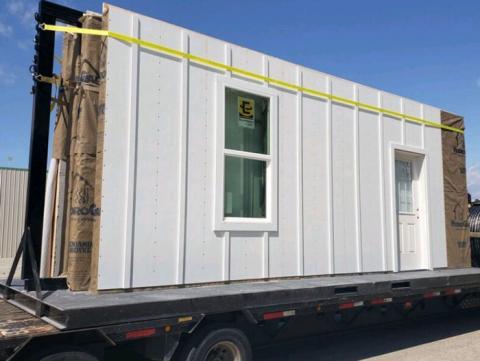 But new products and techniques are helping to improve housing construction. And the primary disruptor in home building — a lack of skilled labor — is prompting today’s builders to turn to alternative methods. The result is a ripple effect leading to additional disruptors in how homes are built.

“Off-site is getting a lot more attention from home builders today than it has in recent years, and the primary driver is the declining availability of highly skilled trades people at the job site,” says Ed Hudson, director of market research at Home Innovation Labs.

Open construction jobs reached a post-Great Recession high of 434,000 this past April before openings settled back down to 369,000 in May, according to the latest data from the Bureau of Labor Statistics and the National Association of Home Builders.

Accompanying the labor shortage are rising land prices and costly regulations, and the industry is looking for answers. A promising solution has been a shift from on-site construction to a mix of offsite, pre-cut components and panels or complete framing packages.

“What we are also going to see is an uptick in wall panels,” Hudson says. “Our data shows that wall panels and precut floor panels are among the leading off-site solutions that builders are considering at this point and expect to be adopting.”

In addition to cost savings, an advantage of off-site construction is speed. Housing remains landconstrained with 2% fewer communities built this year than a year ago. At a recent summit conducted by John Burns Real Estate Consulting, land developed was rated the “worst risk adjusted by housing sector” by nearly 60% of the executives at the summit.

Tarina Homes in Bakersfield, Calif. uses SIPs (structural insulated panels) as a backbone for factory-built housing. Panelizing with sticks forces builders to shear at least one side of the wall for transport whether it’s needed structurally or not. But with SIPs, the panels are already insulated and sheared with code-qualifying 7/16” OSB for the faces of the panel.

“We found that if we stitch together multiple SIP panels and then install value added items such as doors, windows, drywall, and siding in the factory, then we can have the house completely dried in and secured within a few days,” says Chris Johnston, president of Tarina Homes.

Cycle times are what originally opened Johnston’s eyes to SIPs.

“We were running between 62-64 days,” Johnston says. “The labor issues have been well documented in every market for many years. We started experiencing schedule slippage in 2015 and saw the cycle times increase to 70-80 days.”

While Tarina Homes is still fine-tuning its formula, Johnston said that he believes the company will be able to get its cycle time down to 27 days.

“Dropping that number makes a huge impact on the balance sheet. Being able to deliver a house before the buyer’s loan is complete is really a game changer and limits the developer’s risk,” Johnston explains.

At MiTek, the term “the cassette movement” is used to define some of the changes in the building strategy. Various components of the home, including flooring and wall panels, are put together with utilities, siding, and wallboard pre-installed. The tactic avoids jobsite collisions with subcontractors running into one another and adding more time to the process.

While just 10% to 15% of the industry might be building this way now, that number could grow to as much as 40% in the next 5 years, according to MiTek’s projections. But if the floor panels and wall panels aren’t arriving at the site at the same time, much of the cost savings can be lost.

“Changes are hard to adopt, integrate or bring to the forefront,” Moore says. “The company that is able to bring the right process, quality and leadership is really going to bring value to the industry long term.”

“Home builders want to keep carpenters at their disposal and on their job site but are willing to get more done by lower-skilled workers,” says Hudson, who expects precut packages to increase in popularity to satisfy the need to get more done with fewer skilled people.

The industry has evolved from the early 1900’s with companies being more vertically integrated and employing tradesmen, to the late 1900’s with much of the work being subcontracted. Managing the quality and the schedule has become more and more difficult.

“To use a baseball analogy, we’re really in the top of the first when it comes to factory-built housing. It’s really an exciting time to be in the business. We’ll see more changes in the next 5-10 years than we did in the last 200,” Johnston says.

(Editor's Note: This article originally appeared in the July/August 2019 edition of HBSDealer.)
Advertisement