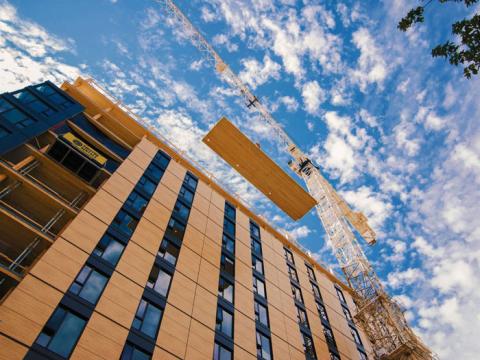 Structurlam Mass Timber Corporation announced that it is expanding its operations into the United States, with a new plant in Conway, Ark.

The Penticton, British Columbia, Canada-based company, in which Walmart has made an investment, will spend $90 million to purchase, retrofit and equip a former steel plant. The facility is set to open in mid-2021 and create 130 jobs. Additionally, the plant will source softwood lumber from Arkansas-grown Southern Pine trees.

"The commercial and residential building industry is experiencing a revolution brought on by the rise of mass timber building solutions," said Hardy Wentzel, CEO of Structurlam. "At Structurlam, we're transforming wood, one of nature's most renewable resources, into a greener, more cost-effective, and aesthetically-pleasing alternative to concrete and steel. We're proud to establish roots in the great state of Arkansas and the City of Conway, and support Walmart as the exclusive supplier of mass timber products for its new home office campus." Hardy Wentzel, CEO of Structurlam.
Mass timber is a category of building construction featuring structural laminated wood components for walls, roofs, floors, beams and columns. A key economic benefit of mass timber is the ability to design, model and prefabricate the structural elements of a project offsite, accelerating on-site production schedules by up to 25% compared to traditional onsite building with steel and concrete, according to Structurlam.

The manufacturer said it is the first manufacturer to bring mass timber to the North American market and the first to introduce CLT in the production of industrial ground protection matting products used in the energy and power transmission sectors.

"Our new U.S. location will answer the demand for mass timber building products and industrial matting products in the southern, central and eastern United States, and will complement our British Columbia operation serving the Canadian, Pacific Northwest, California and Intermountain markets," Wentzel noted.

Walmart has already planned to be the first customer of Structurlam's Conway facility. "Structurlam is uniquely positioned to deliver its innovative approach to digital design collaboration and mass timber manufacturing to Walmart and the State of Arkansas," said Dan Bartlett, executive vice president of Walmart Corporate Affairs. "With their help we are able to realize our goal of connecting our associates with nature and the beauty of Arkansas through our new home office project."

The size of Walmart's investment in Structurlam was not revealed.

Structurlam noted that it selected Conway for its proximity to 19 million acres of sustainable forestland that covers more than half of the state's total land area. The new plant is located close to transportation corridors that reach large southern and eastern markets. Other considerations included a site-ready location and available workforce.

“With 19 million acres of available forestland and a skilled workforce that is second to none, Arkansas is the natural choice for Structurlam's first expansion into the United States," said Arkansas Gov. Asa Hutchinson. "We are excited about the technology and the additional opportunities for growth Structurlam brings with it to Arkansas. The company's partnership with Walmart is an example of how this expansion will benefit our state's timber industry." A Structurlam job site.
In the weeks leading up to this announcement, Structurlam also made several key executive appointments.

Paul Sehn has been appointed to the role of senior vice president of sales and marketing. Sehn has more than 30 years of experience in the North American engineered wood products industry, in both construction and industrial verticals.

Also, Michael Darby has been appointed as chief financial officer and Greg Johnston has been named senior vice president of manufacturing and operations.

Developments in the mass timber industry have been arriving fast in recent months.

In October, SmartLam announced that it had reorganized as SmartLam North America to better serve the needs of the rapidly expanding mass timber market via intelligent and integrated cross-laminated timber (CLT) and mass timber building solutions.