Lumber: Although producers experienced a mild uptick in sales at midweek, SPF pricing was down for the week. The threat of a Steelworkers union strike at western Canadian mills sent some buyers looking for coverage, helping to firm up prices. Futures at a premium to cash did little to stimulate sales activity. The last vestige of strength in Southern Pine #2 dimension pricing lost its momentum, unable to push higher this week. Mill offerings of 2x4 increased by volume, leaving prices flat after seven weeks of steady gains. Pricing of other dimensions continued declining by double digits. Coastal species pricing remained on a downward trajectory. Some hefty discounts were used to move off excess supplies, generating another week of fairly significant price spreads. Inland lumber producers varied considerably in their assessment of the market. They agreed that prices were softer, but they disagreed considerably by how much softer prices had become. The result was a wide spread in pricing. Stud pricing continued to flounder. Buyers remained cautious, seeing no indication of firmer levels. Traders were disappointed that a potential strike at Canadian mills and gains in futures did not influence pricing more positively. Producers offered the occasional deep discount to move excesses. Ponderosa Pine Selects and Commons showed reasonable stability in all of the Selects, but Commons demonstrated more than a few weaknesses. Most producers tended to “quote and hold” regarding prices, especially of the #3 and #4 Common, but anyone having volume to move was forced to negotiate. Industrial pine lumber supplies were termed “adequate” or “more than adequate,” depending on the item in question. Mldg&Btr, in both 5/4 and 6/4, was described as “balanced,” indicating no significant changes in supply or price. A slow sales pace eroded Western Red Cedar order files for producers selling tight knot products. Other producers reported more “sporadic” activity. Some pressure on tight knot prices developed as mill order files eroded.

A price index of lumber and panels used in actual construction for Oct. 5, 2018. 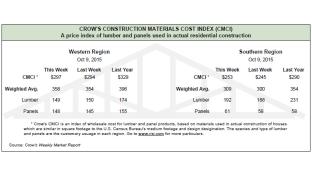