That’s one of the messages from Bob Sanford,  who is serving as chair of the National Lumber and Building Material Dealers Association for a second year. The president of Connecticut-based Sanford & Hawley encouraged dealers to take part in efforts that promote the well-being of the LBM industry.

Sanford, the NLBMDA and a ballroom full of pro dealers and suppliers gathered at the Broadmoor hotel here to discuss efforts of the past year and recognize champions of the industry at the opening of the 2019 ProDealer Industry Summit.

"A big first step was to reaffirm that the principal purpose of the NLBMDA is to be the industry's voice in Washington with a focus on both legislative and regulatory matters," Sanford said.

After reviewing a year's worth of meetings with regional associations, yard visits and accomplishments, Sanford said," For the year ahead, the goal is to continue to the work of 2019."

The NLBMDA also took the time to recognize a trio of industry veterans who given their all to the industry.

"One of the great joys of being NLBMDA chair is getting to know and work with some of the most committed people in our industry," Sanford said.

Presented with the Chairman Award was Clarence Wilkerson, East Division manager of Weyerhaeuser. In addition to a 33-year career at Weyerhaeuser, Wilkerson has a passion for supporting at-risk youths through mentoring and serving as a community leader. When it comes providing assistance for the industry, Wilkerson is all in. Sanford, left, with Wilkerson.
"Whenever he has been called upon for his leadership and support, he has never hesitated to volunteer," Sanford said of Wilkerson's efforts.

Wilkerson kept his acceptance speech short and told the audience, "We have a beautiful thing going. Keep it up."

The next Chairman Award was presented to Scott Engquist who, in addition to operating Engquist Lumber Company in Iowa, has volunteered his time to the industry since 1994.

"Never one to miss a meeting, Scott has faithfully attended at least 10 - if not more - NLBMDA Legislative Conferences and ProDealer Summits and is an active lobbyist on behalf of lumber and building material dealers nationwide," Sanford said.

The NLBMDA also presented Max Guetz with the Distinguised Service Award. It was only the second time the award has been given out in NLBMDA's 100-year-plus history. Guetz remains active on the Mountain States Board, serving as director of Colorado, following a career in the lumber industry.

"We all love what we do," Guetz said. 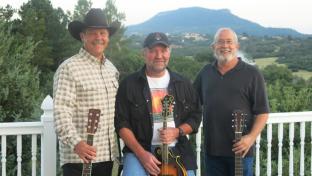