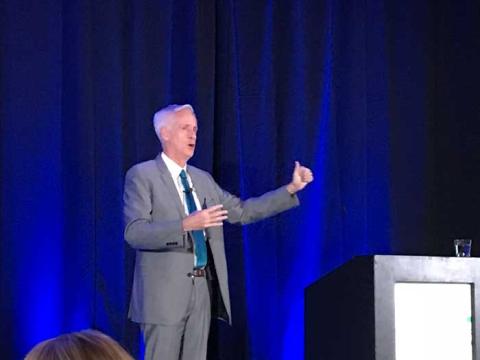 Single-family housing construction growth of 2% is projected for 2019, according to John Burns, the CEO of John Burns Realty, LLC – a research firm focused on the housing market.

Burns delivered his forecast to a room full of LBM executives Friday morning at the 2018 Pro Dealer Industry Summit, held here at the Radisson Blu Aqua Hotel. The forecast for 2020 is also 2% growth, Burns said.

And there are disruptive forces on the horizon, including the possibility of a recession. According to Burns’ analysis, there is a 27% chance of a recession occurring in the next 2 years and 56% chance it may occur within the next 4 years.

The respected consultant and analyst pointed to some culprits, chief among them are debt piling up from auto loans and student loans. The housing market will not be the cause this time around, however, Burns said.

“If we have a recession it’s going to be a hiccup,” he said, noting it will be nowhere near the magnitude of the previous "Great Recession."

At the current rate – on a scale of 0 to 100 – Bruns said the economy is running at a level of 75. “The economy is doing great and that’s because of the Tax Act. That’s been a stimulus that is working,” Burns noted. “Small businesses are hiring and consumer confidence is up 9% year over year and near an all-time high.”

But production-builder community counts have gown only 1% in the last year, and publicly traded builders have seen their community count fall. “They are buying each other because it’s the only way to grow,” Burns explained.

At the same time, high development costs and a shortage of housing has allowed builders to push up the prices of homes. “We’ve been so supply constrained on new homes that builders are bidding up lot prices, but there are people who are willing to step up and pay the price,” said Burns. He also noted that 11 out of the top 19 publicly traded builders are charging an average price of $400,000 or better for a new home. That's generally out of the affordability range of the American family making $70,000 per year.

Looking at entry-level builders, about 33% reported that they are moving further away from job centers when building new homes. About 55% said they are using a smaller lot size, and 45% said they are turning to smaller homes.

Burns expects remodeling spending to remain steady – as more homeowners stay put and choose remodeling over purchasing a new home – but he also expects the total amount spent on each remodeling projects to decline as homeowners turn to cheaper projects.

Other disruptors lying ahead for the industry include factory-built homes. Both domestic and Japan-based home builders are beginning to demonstrate traction in regard to the growth of the U.S. factory-built home market. And investors, including Amazon, are pumping more money into the market.

Additionally, factory-built homes have become an avenue for growing smart home product sales as younger consumers seek out the latest and greatest in technology.
Advertisement