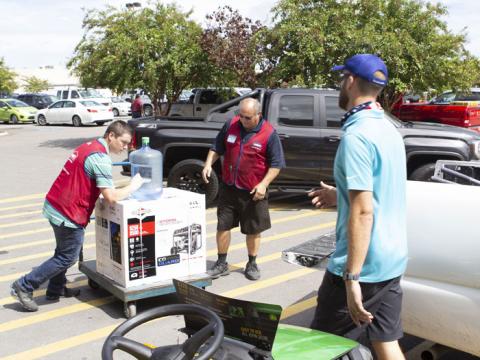 Lowe's said that it has committed $1 million to support disaster relief efforts for associates, customers and communities in direct response to Hurricane Dorian's impact along the U.S. coast and the Bahamas.

The Mooresville, N.C.-based retailer also said that it will continue to work closely with nonprofit partners and government agencies to determine immediate and long-term support needed by local communities.

To support customers and communities as they prepared for the storm and in the clean-up and recovery that follows, the Lowe's Emergency Command Center shipped more than 6,000 truckloads of supplies, including generators, bottled water, sand, plywood, chainsaws, trash bags, gas cans and tarps.

Many of these shipments were made before the storm even hit the United States.

"Lowe's is committed to helping our associates, customers and the communities we serve recover and rebuild from Hurricane Dorian," said Marvin Ellison, Lowe's president and CEO. "Beyond our financial commitment, Lowe's will help communities recover with product donations and volunteer support alongside our nonprofit partners for weeks and months to come."

Lowe's said it is working with the American Red Cross, the Bahamas Red Cross and additional disaster relief partners to help communities impacted by the storm.

On Sept. 8, teams of Lowe's associates from stores in Charlotte, Atlanta, Richmond and other locations were deployed to areas most affected by Hurricane Dorian. The teams provide additional customer support and give fellow associates a chance to focus on their families.

Lowe's said it will further support affected associates by doubling the company's match to the Lowe's Employee Relief Fund, which provides financial assistance in times of crisis. Since it was established in 1999, the fund has helped more than 33,000 associates by providing more than $39 million in financial aid.

Lowe's and its related businesses operate or service more than 2,200 home improvement and hardware stores and employ approximately 300,000 associates in the United States and Canada.