“Typically, our Nashville market is the largest of the three we hold each year,” said Steve Henry, House-Hasson executive vice president. “This year’s summer market outdistanced every other market in the company’s history; it’s phenomenal.”

Both new and longtime vendors, along with House-Hasson dealers, were kept busy selling and buying at a market that saw a nearly a 20%  sales increase over the 2018 summer market, according to Don Hasson, president of House-Hasson.

“We have new salesmen working new territories and the results are more dealers at our market,” Hasson said. “Increased territory, salesmen, and dealers helps to achieve sales growth generally. The point is to achieve growth strategically in a way that best serves your customers and your company.”

In March 2019, House-Hasson announced the purchase of $2.5 million in inventory from Hardware Distribution Warehouse (HDW) of Greenwood, Miss., which shut down in Jan. 2019.

“The eight HDW salesmen we added had existing relationships with dealers in Texas, Louisiana, and Arkansas,” Hasson said. “We have several hundred new dealers, and that’s helped to push higher our market attendance and sales.”

“We were very pleased with the response to Flexon’s market arrival,” Monroe said. “They did some clever packaging, putting a nozzle on a section of hose, which helped to attract attention.”

Melissa and Doug, the Wilton, Conn.-based toy manufacturer specializing in wooden puzzle, arts and crafts and education toys made its inaugural visit to the market. According to Monroe, the manufacturer realized “several thousand dollars in sales.”

Based in Knoxville, Tenn., House-Hasson serves 2,500 dealers in 23 states and the Caribbean. The distributor’s next market is scheduled for Oct. 24 -26 at the Sevierville Event Center. 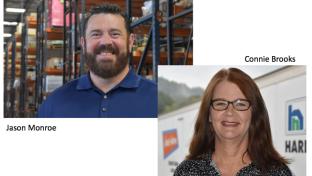