Oregon has become the first state to approve the use of science-based building code requirements for tall mass timber buildings under their statewide alternate method (SAM). The SAM program is unique to Oregon, allowing early technical consideration and approval on a statewide basis.

The Administrator of the State Building Codes Division issued SAM No. 18-01, providing a prescriptive path for utilization in Oregon of the code requirements developed by the International Code Council (ICC) Tall Wood Building Ad Hoc Committee over the past two years. The comprehensive requirements also received a favorable recommendation during the April 2018 ICC Code Action Hearings, which was the first step of the process to include them in the 2021 International Codes.

“We congratulate the State of Oregon on becoming the first state to provide building code recognition for construction of tall, mass timber buildings,” said American Wood Council President & CEO Robert Glowinski. “Mass timber is a new category of wood products that will revolutionize how America builds and we’ve seen interest in it continue to grow over the last several years. This action by the Codes Division Administrator helps code officials in Oregon by making provisions consistent throughout the state. In adopting this new method, Oregon has also recognized the significant environmental benefits that accrue from greater wood product use.”

Since the current 2014 Oregon Structural Specialty Code is based on the 2012 International Building Code (IBC), this SAM is also correlated to incorporate code changes to the 2015 and 2018 IBC allowing cross-laminated timber (CLT) and structural composite lumber. It is also consistent with the use of prior SAM No. 15-01 issued in January of 2015 allowing use of CLT. 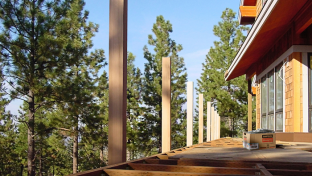