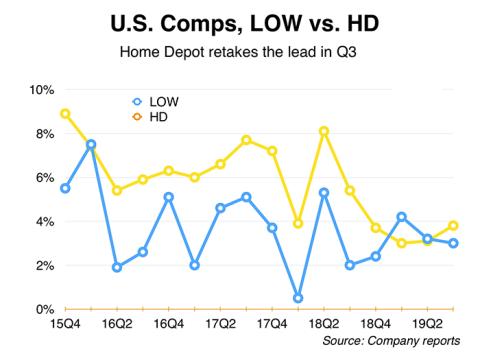 The Home Depot reclaimed its lead in the comp-store sales comparison with its largest rival, posting a 3.8% comps in the U.S., compared to 3.0% growth for Lowe’s.

Depot’s stock has dropped from 238.85 before its earnings release, and it was trading Monday at about 217. Lowe’s on the other hand saw its shares rise from a pre-earnings release 113.40 to about 117 early Monday.

At Lowe’s, e-commerce is described as a business under repair, as the company reported third-quarter Lowes.com comp growth of about 3%. Lowe’s CEO Marvin Ellison said: “We expect to see our Lowe's.com growth rate start to accelerate in the back half of 2020.”
Advertisement