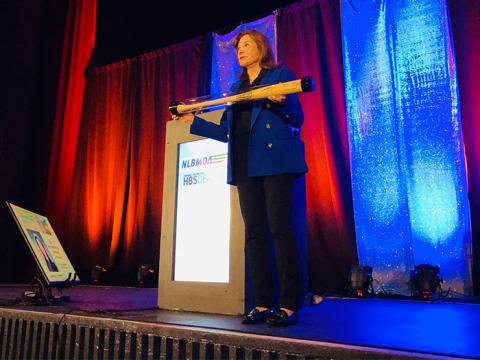 Colorado Springs, Colo. -- Linda Alvarado, the barrier-breaking co-owner of the Colorado Rockies and CEO of Alvarado Construction, stepped up to the plate here during the ProDealer Industry Summit, and offered several “Major League Business Strategies.”

Her career story included the following words of advice and inspiration.


Alvarado also encouraged the LBM industry attendees to participate in the pursuit of education, and take full advantage of events like the ProDealer Industry Summit. Linda Alvarado
“I think this group gets it. You’re here to learn and use the information,” she said. “Look at what you do, you're building strong foundations for America’s future. We won’t agree on everything, The important thing is  what you do when you leave here.”

Alvarado has 30 years of experience in commercial development, government and institutional general contracting, construction management, design/build, and program management contracts. Alvarado made history as the first Hispanic owner of a Major League Baseball franchise. As an owner of the Colorado Rockies, her role is also significant as it marked the first time that any woman was involved in a bid for ownership of a Major League Baseball team.

She has been the focus of many articles in newspapers, books, business publications, educational curriculum, and civics texts; has graced the cover of several national magazines; and has been featured in numerous media broadcast productions. Alvarado has set high standards as a successful business owner and her accomplishments have opened doors for women and minorities to enter new careers.

The ProDealer Industry Summit is hosted by the National Lumber and Building Material Dealers Association in partnership with HBSDealer.

Technology is changing baseball significantly, she said. Just look at the cameras measuring the speed, spin and path of the baseball from the mound to home plate. Business is very similar.

“It’s either transformation in business or fossilization," she said. "And I’m sure you don’t want to be in the Smithsonian.”
Advertisement