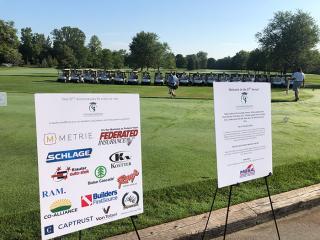 ANDERSON, INDIANA—The Midwest Building Suppliers Association’s 27th annual Sycamore Scramble brought together a respectable segment of the Indiana and Michigan LBM industry for a day of networking, friendship and golf.

The mid-August event benefited the Blair F. Collings Scholarship Program named in honor of the son of MBSA Charter President Joseph R. Collings. Blair was a senior in college when he died in 1998.

According to MBSA Executive VP and CEO Tim Murphy, the Sycamore Scramble is “a focal point of what we do in the summertime. It brings the dealers together, the wholesalers and manufacturers together, and brings everyone together to have a great time, and a little competition.”

Equally important, he said, was the effort to support the scholarship program. Somewhere between $8,000 and $10,000 was raised during the day’s activities.

“This outing has really grown and become a great hallmark for the MBSA,” said Murphy, who thanked sponsors as well as a sizeable contingent from Grand Rapids, Mich.-based Lumbermen’s Inc. for their contributions.

“It was a marriage made in heaven,” Murphy said, resulting in bigger and better programs and services.

Among the more recent services are additions to the MBSA Learning Management System, including estimating skills for foundations and framing; and a 401(K) solution, offered through Captrust.